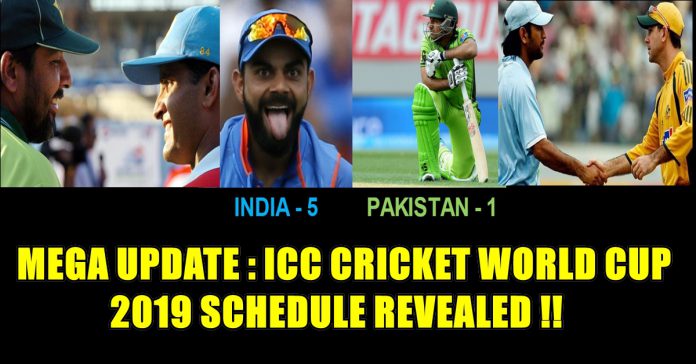 The hosting rights were awarded in April 2006, after England and Wales withdrew from the bidding to host the 2015 ICC Cricket World Cup, which was held in Austalia and New Zealand. The first match will be played at The Oval while the final will be played at Lord’s. It is the fifth time that the Cricket World Cup will be held in England and Wales, following the 1975, 1979, 1983 and 1999 World Cups. The format for the tournament will be a single group of ten teams, with each team playing the other nine teams, and the top four teams progressing to a knockout stage of semi-finals and a final. The ten team tournament has gained criticism due to the lack of Associate teams in the tournament. Given the increase of the Test playing nations from 10 to 12, with the admission of Ireland  and Afganistan in June 2017, it will be the first World Cup to be contested without all of the Test playing nations being present,and after the elimination of Scotland and the United Arab Emirates, this will be the first World Cup to feature no Associate members.

India will play their first match of the 2019 World Cup against South africa on June 5 in Southampton, it was decided during the ICC Chief Executives meeting in Kolkata where the tournament fixtures were tabled. South Africa will also feature in the tournament opener at The Oval on May 30 against hosts England. The final of the quadrennial event has been scheduled to be played at Lord’s on July 14. The itinerary drawn out by the CEC will need to be ratified by the ICC board, which meets on Thursday (April 26, 2018). India were initially pencilled in to play their tournament opener on June 2 but that date had to be pushed back upon request from BCCI, who wanted to comply with a Lodha Committee recommendation that mandates a 15-day window between the IPL and India’s international assignment. The 12th season of the IPL is earmarked to be played between March 29 and May 19 next year.
Meanwhile, according to an ESPNCricinfo report, the Pakistan-India group stage clash will be played at Old Trafford on June 16. The Manchester venue also hosted the marquee Super Six clash during the 1999 World Cup. In all, eleven venues, including Lord’s, The Oval, Edgbaston, Old Trafford, Headingley, Trent Bridge, Southampton, Cardiff, Chester-le-Street, Taunton and Bristol will host the games across 46 days of the competition. The 10-team tournament will have 48 matches in total, with each team playing all other nine teams during a single group round-robin phase similar to the one used at the 1992 World Cup. The four top teams at the end of the league stage will face off in the two semifinals, allocated to Old Trafford and Edgbaston respectively. All three knockout games, including the Final, will have a reserve day. This is the first edition of the World Cup to be played without any Associate nations after the ICC decided to clamp down the tournament to 10 teams. While the top-eight teams, including hosts England and defending champions Australia qualified to the tournament on the basis of their ICC Rankings, the two remaining places were snapped up by Afganisthan and Windies, the finalists at the recently-concluded ICC World Cup Qualifier.