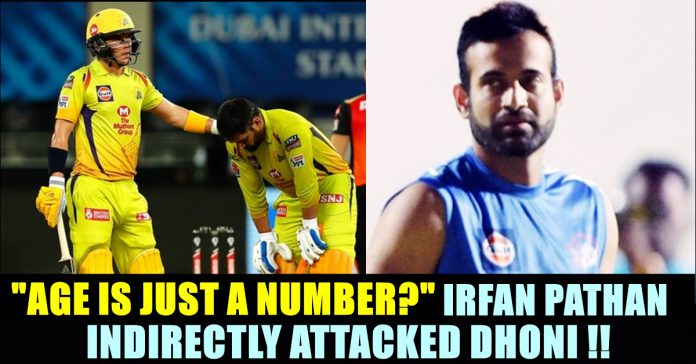 After CSK’s third consecutive loss, a cryptic tweet posted by former Indian seamer Irfan Pathan has created huge outrage in the social media platforms. In the last match, unlike previous occasions, Dhoni missed to connect the ball well and became a subject to the attention of social media. In the final moments of the match, Dhoni found it difficult to middle it and the yellow team failed to chase the score.

Now, after the loss, a tweet posted by Irfan Pathan has created huge outrage among the Internet users. The left arm pacer has said that “Age is just a number for some” and for some it is a reason to be dropped, indirectly targeting MS Dhoni.

Dhoni who announced his retirement in all forms of International cricket, is currently captaining the yellow side. While talking about the lack of big hits, Dhoni said “I tried to get as much time as possible. It is quite dry out here. So, the throat gets dry and you start to cough. When you have legal signs, you can take some time off,”

However, the tweet of Irfan read “Age is just a number for some and for others a reason to be dropped…”

“10000000 percent agree with you”. Harbhajan wrote while replying to Pathan.

Both Harbhajan Singh and Irfan Pathan have played for the CSK team. While Bhajji left the tournament due to personal reasons, Irfan turned as a commentator. Talking about CSK’s woes in the ongoing cash-rich league tournament, the former champions and skipper Dhoni looked a pale shadow of their past selves as they remain at the bottom of the IPL points table. “Long time back once we lost three in a row. We need to get a lot of things right. It is professionalism. We need to take our catches, not bowl no-balls. Those are the controllables and maybe we are getting too relaxed,” Dhoni said after the match.

Check out some of the reactions for the tweet of Irfan :

Dhoni could not comment a word on SSR death.. Karma is a bitch..

A major reason behind his retirement was sadly involvement of Dhoni and politics.

Finally time to barking … 😁😁😁😁😁😂😂😂😂 After a years of years ……. Just showing u r frustration while though time … I m thinking how many years you r burning inside while they good times …. 😂😂😂😂😂 …. Always thala remain thala…. Msd forever… pic.twitter.com/VIx4PSHbzq

Clearly you don’t have guts to say his name.. bro c’mon show some respect to d legend. It’s not all about throwing the ball with 140kph speed.. it’s all about focusing the ball till the very end and connect the shot to get a boundary and run 31kmph to get doubles and singles.

So you cannot question him now pathan 🤫🤫🤫#CSK