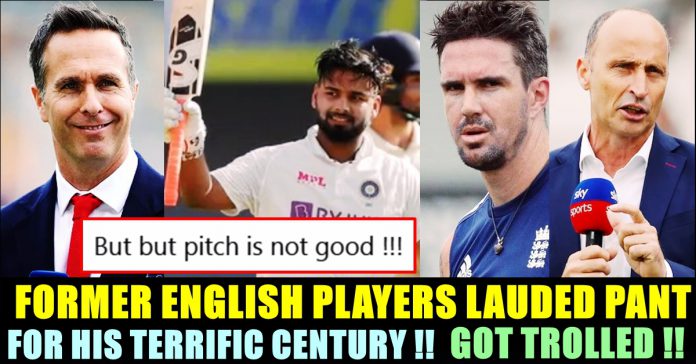 Rishab Pant completed his century and saved team India from getting all out within 200 in the first innings. His knock helped the team to have a handy lead against the visitors and the cricketer got out for 101 in a delivery bowled by James Anderson. Pant finished his innings with 13 fours and 2 sixes with a strike rate of 85. When he smashed the second six, the cricketer was playing at 94 and it is reverse scoop he played against Jimmy Anderson made Internet and cricket experts go crazy.

I don’t think anyone has had the skill audacity to do that to Jimmy Anderson (in a Test) before #INDvENG #astonishing pic.twitter.com/T3snjDstW5

Nasser Hussain who captained team England in the past, uploaded a tweet terming writing “Drives me mad when batsman say “Well that’s the way I play“ … Pant has shown in one innings that is complete nonsense! Play the situation….”

Drives me mad when batsman say “Well that’s the way I play“ … Pant has shown in one innings that is complete nonsense! Play the situation….

“Why? Just cos you could only play one way? BLOCK! BLOCK! BLOCK!” Kevin Pietersen replied to the tweet of Hussain.

Why? Just cos you could only play one way?

While the fans of team India are lauding the youngster for his fearless innings in an important test match that decides the finalists of World test championship, few even criticized the youngster’s attacking innings during the crucial time.

Many other former English players including Michael Steven who is known for criticizing team India posted tweets praising the young talent. However, their tweets didn’t go well with the fans of team India as they were following them since the start of the series. Pointing out the contradictory tweets uploaded by them, Indian fans trolling the former cricketers of team England.

Check out some of the tweets of the experts and the reactions they received :

Hmmm, think the pitch is to blame. He's the only one who can play on it. Thats not fair!

We would be howling if it was India bowling

This is the first test century for Rishab Pant in his home soil and third overall. The cricketer got his first 50 in 84 balls and smashed the next 50 in just 35 balls which impressed the cricket experts. “The plan was just to build a partnership when I joined Rohit, that was the only thing on my mind. I was thinking I would assess the pitch and then play my shots. If the bowlers are bowling well respect it and take the singles, and that was on my mind. I like to play the situation and I just see the ball and react – that’s the USP of my game” Pant said after his terrific innings.