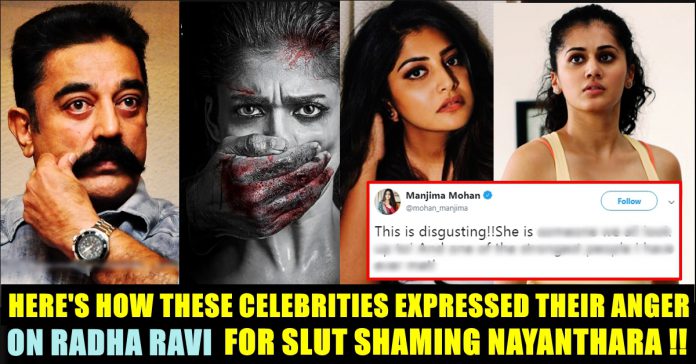 For Radha Ravi’s derogatory speech against actress Nayanthara, Social media erupted and came in for her support. Starting from Chinmayi who is a representative of MeToo movement in South India to Nayanthara’s boyfriend Vignesh Shivan everyone condemned Radha Ravi for his abusive speech against the leading actress.

In his speech the veteran actor said that Nayanthara is acting as Ghost in Tamil films and acting as Sita in other languages as well. “At our times makers would cast an actress like K.R Vijaya in a role of a goddess but nowadays they can cast anyone irrespective of their personal character. The combination of Tamil words he used to express his thoughts added fuel to his misogynist speech. He said “Paatha odane Kumbidravangalayum podalam, Paatha odane Koopidravangalyum Podalam” ( One can cast who is respectable and one can cast someone who sleeps around)

This instigated many celebrities to raise voice against the actor. Check out some of their statements regarding this here :

This is disgusting!!She is someone we all look up to! And one of the strongest people I have ever met! https://t.co/dKVfkQZ5Zj

This is disgusting beyond words. Who asked him about casting pre requisites and is he the president of character certificate association? This comes for one of the strongest actresses of the industry,I can only wonder what he might have to say about others https://t.co/tFjTZ04gRB

Not d 1st time #RadhaRavi sir has shamed a woman on stage!I’ve seen many such incidents go unnoticed but #Nayanthara is a SuperWoman &beyond!Her growth is clearly visible jus wid her dedication&hardwork!We can all bark here but I really wish some action is taken by the right ppl

Enough is enough!This sort of disgusting behaviour has gone unchecked for decades in this industry. It is entirely unacceptable and should be condemned!
Instead,all we hear is silence,laughs and applause.Such a Shame !https://t.co/bsg8oTy6Pj

The easiest way men find to boost their ego is by shaming or character assassinating a woman..how a woman lives or what she does with her is nobody’s business..#Nayan is a beautiful person inside out..those who shame her n were clapping are an insult to the fraternity of cinema..

Nayanthara is one of the few dedicated actors we hav today, have the pleasure knowing her and sharing professional space with her, she is above all this, did not watch full video , but met Ravi today and told him it was not in good taste at all. https://t.co/zTUVSa4fWC

#RadhaRavi thinks “ I’m the best misogynist in this industry but nobody is noticing me! 🙄All my juniors(old Uncles) are trending, How do I surpass them?”
😉Idea: abuse and shame the most successful women in south cinema on stage. #Nayanthara

Dear #radharavi SIR.Yes as a gen Secy of Nadigar sangam I wish I had da pleasure of signing the letter of condemning u 4 yr stupidity n yr recent speech against women n particular.its snt 2 u.grow https://t.co/IgLu1huAfc yaself Ravi fm nowonwrds Coz u hv a woman s name n ya name.

Women do make mistakes that doesn’t mean they r bad, it means they were treated bad by men. Men doesn’t want to accept their mistake & cowardly slutting women is all they can do. A male chauvinist who can’t stand by a woman r shame to be called male gender. They r thrown to dirt.

#Nayanthara mam is an inspiration for so many young girls ! #RadhaRavi sir should be removed from all the posts and its time he holds a press meet and apologies to her !

When you don’t judge a man on whatever he does no matter how unethical or wrong or terrible..or how many partners he has..nobody has the right to judge a woman either.. when u don’t feel like raping ur sister no matter what she wears learn to respect another woman too…

Apart from them many fans of Nayanthara and press people also supporting Nayanthara through their tweets. What do you think on the statement of Radha Ravi ?? Comment your views below !!