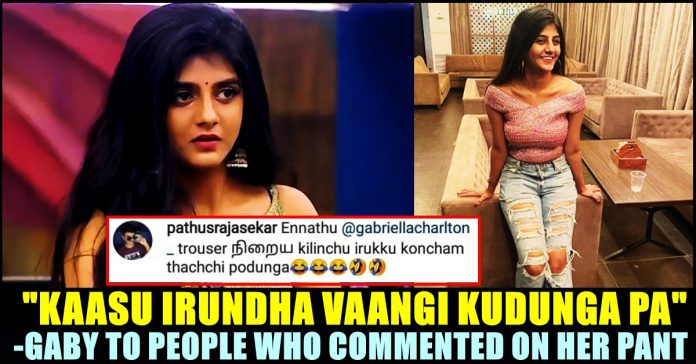 Gabriella of Bigg Boss fame came up with a post in her official Instagram account on Monday to reply people who trolled her for the ripped jeans she wore in one of her previous posts. She who gained fans with her jovial nature and outspoken attitude inside the Bigg Boss house, asked the trollers to buy her a new one with their money instead of dropping comments criticizing her clothes.

Gabriella, a skilled dancer entered the Kamal Haasan hosting Bigg Boss show to build a career for herself in the film industry. She who made her debut into Tamil film industry by acting as Shruthi Haasan’s younger sister in “3” film, played exceptionally well throughout the season. Be it tasks or addressing the issues that are taking place inside the house, Gaby always excelled in it and gained a separate fan following among the Television and Internet audience.

The aspiring actress’s decision of walking out of the Bigg Boss house with a cash prize was dubbed by the audience as a smart move as well. Gaby is currently enjoying 9 lakh followers in Instagram after posting 172 posts. She who keeps her followers engaged by uploading posts from her photo shoots and updating about her upcoming works, is involved in online branding and endorsing products as well.

Most lately, Gabriella came up with a post endorsing a skin care clinic. She suggested her followers to take treatment in the clinic if their skin worries them but what grabbed the attention of most of her followers is her pant. Many of her followers criticized the ripped jeans she was wearing while promoting the clinic and started trolling her.

Check out some of the comments surfaced in the post :

Reacting to these kind of comments, Gabriella, on Monday, came up with a post uploading a series of pictures of herself wearing similar jeans and asked her followers to buy her a new pant with their own money instead of wasting their time on commenting.