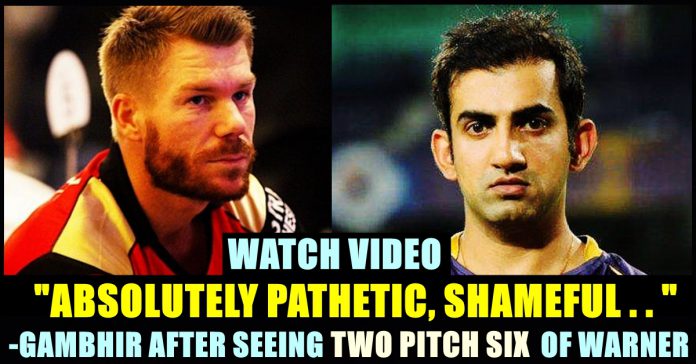 Team India’s World cup winning former opener Gautham Gambhir expressed his displeasure over a shot played by David Warner during his batting innings in the semi finals against Pakistan. On seeing the the Australian opener sending a two bounced ball to maximum, Gambhir said that his gesture was an absolute pathetic display of spirit of the game and termed the shot as “Shameful”. He also tagged Tamil nadu based cricketer Ravichandran Ashwin and asked his opinion about the same. Reply from the off spinner is awaited.

After winning the toss, Australia’s captain Aaron Finch said that his team will bowl first and restricted Pakistan for 176 in the 20 overs. Despite of Aaron Finch’s golden duck, Australia managed to find boundaries in regular intervals due to the brave batting of David Warner under pressure. He scored 49 runs from 30 balls before getting out and eased the situation a bit. However, job is not done.

Marcus Stoinis did his part but Mathew Wade’s hat trick sixes in the 19th over off Pakistan’s best bowler Shaheen Afridi helped Australia to finish the match with one over to spare. After Hasan Ali dropped the catch of Wade, the wicket keeper batsman smashed three back to back sixes and won the man of the match award after sending Pakistan home.

During the 8th over of the second innings, Pakistan bowler Mohammad Hafeez who came in to bowl lost the control of the ball and it bounced for the second time near Warner’s foot and the left hander launched it for a maximum without a second thought. Umpire Kettreborough declared it as a no ball as it bounced two times. However, the massive hit which demanded to batsman to crouch low, get underneath the low bounce and generate all the power.

The strange six garnered huge reception from the cricket audience. With many lauding Warner’s presence of mind, former India cricketer Gautham Gambhir came up with tweet questioning Warner’s shot selection. “What an absolutely pathetic display of spirit of the game by Warner! #Shameful What say @ashwinravi99”

What an absolutely pathetic display of spirit of the game by Warner! #Shameful What say @ashwinravi99? pic.twitter.com/wVrssqOENW

With Ravichandran Ashwin yet to make his entry, many users of Internet users flooded Gambhir’s comment section with various kind of reactions. Check out some of them below :

What's the problem here? Warner did what a player needs to do to win games for his/her team.
That's it!
Have some shame gg

@GautamGambhir As a fielder will you not run out the batsman if he felt down while running? Common be sportsmanship https://t.co/3dVTDzweIy

Is be being Sarcastic or he is really serious???? https://t.co/3lPcDFfrLY

Comparing Mankading and this…only sanghi buffoons can come up with such absurdity🤡 https://t.co/9qqJKvxe80

Sarcasm on its peak 😭😂 https://t.co/LHLCbvllc9

Gambhir sir giving it back to aussies who trolled @ashwinravi99 for spirit of game .
No fear in supporting in our country men .https://t.co/jZUrRNB4tH

Though the original context of Gambhir’s tweet is unknown, many online users believed that the former opener is bring sarcastic and trolling the spirit and sportsman ship of Australian players who schooled Ashwin during “Mankad” controversy. Few say that the BJP politician tagged Ashwin simply because the latter will always be ready when it comes to the debate on “Spirit” of the game.