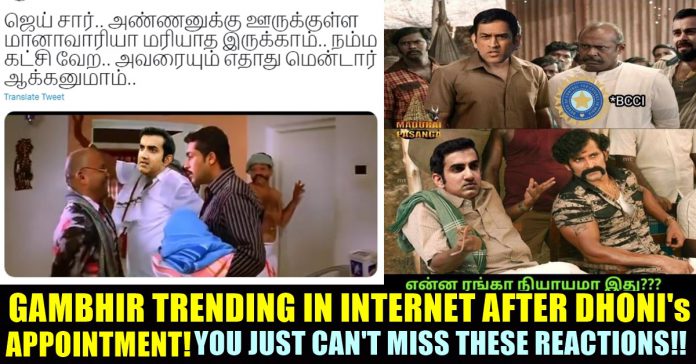 Ever since M S Dhoni was made the mentor of the Indian cricket team, players and fans have been celebrating. Following this hashtag, #gambhir has been trending on Twitter.

Gautam Gambhir, a former cricket player has become a center of trolling after Dhoni was announced as the mentor. Memes on Gambhir being disappointed on Dhoni being made as the mentor has become viral. Despite Gambhir assuring that he and Dhoni are still in a cordial relationship, there has always been a not-so-friendly atmosphere clinging on to them. Things started when Dhoni had a meeting with Gambhir, Sehwag, and Sachin in the year 2012, saying that they won’t be a part of the 2015 world cup, which Gambhir quoted as a ‘Massive Shock’.

On announcing Dhoni as the mentor of the Indian team, Gambhir has said, “MS Dhoni as a mentor with his experience of handling the pressure could be of huge advantage for the young players in the T20 World Cup”

The hilarious trolls on Twitter are a portrayal of Gambhir’s reaction after hearing the news of the mentor. Here are some reaction:

Q. #arturo from #MoneyHeist was inspired by which real life character ?

Q. Who is more sad than #chahal, #Dhawan, and #iyer after #T20WorldCupsquad selection ?

Thala as mentor for Team India
Pakistan head coach post is empty. @GautamGambhir I think you know what you should do now. #T20WorldCupsquad #Thala #Gambhir