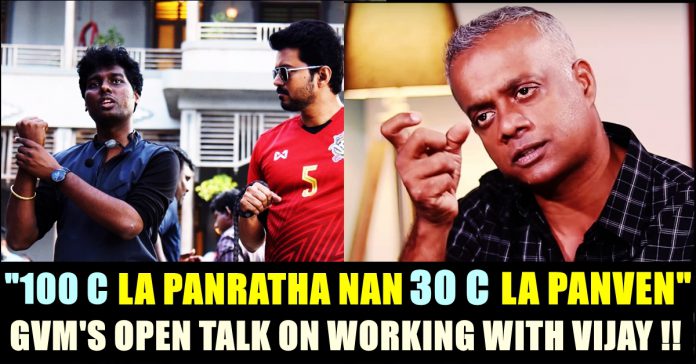 Gautham Menon’s long awaiting films Dhruva Nakshathiran and Enai Nokki Paayum Thotta are going to see the light finally, according to the tweets of the director. Gautham, in his official twitter account said that “Enai Nokki Paayum Thotta” is going to be released on November 29 which is day after tomorrow, under the banner of Ishari K Ganesh, Vels film International.

Filmmaker Gautham Menon made a glorious debut in 2001 with Minnale, and since then, he has been tasting success after success with his eccentric films. His impressive filmography includes Vettaiyadu Vilayadu with Kamal Haasan, Vinnaithaandi Varuvaaya with Simbu and Vaaranam Aayiram and Kaaka Kaaka with Suriya.

However, the last couple of years haven’t been good either to Gautham or to his fans. His production house incurred huge losses, his films got postponed multiple times and more importantly, he hasn’t been able to pay remunerations to his actors, according to reports.

Now the filmmaker, in his recent interview has opened on many matter including the struggles he faced all through the years. Unlike his other interviews, the filmmaker, in this talked about incidents that he went through frankly. While talking about why he hasn’t done a film with actor Vijay yet, Gautham menon has said he couldn’t find a script for the actor. The filmmaker further added that Vijay requires an intro song, mass scene, punch dialogues which he couldn’t do in his story.

“I have been seeing the movies done by Vijay and I wish to do a film with him. We have met a couple of times regarding doing a film together but unfortunately things are not falling in place. I would approach him with a script which I like but it didn’t work out for him. He also said that we will do a film together. It will happen” says the director.

Further he added “I have a story. I think it would be good if he fits in the story. But if I start making a story for him. I think it won’t work. If he fits in my story, I can do the same what he wants me to do in my way. It is wrong to work on a story for him” says the director who says that he don’t mind saying it. “While working with Ajith, they called me for a remake. But I convinced Ajith to do in “Yennai Arinthaal”. In his case even when I added few things for his fans, Ajith restricted me which I loved” he added.

“If Vijay believes me as a filmmaker who did 18 films, I can do a film for him within a budget of 30 crore who is working in films with the budget of 80-100 crores. And that film will release on Diwali” said Gautham with firm confident.

Apart from that Gautham revealed the issues he is having with filmmaker Karthick Naren in the interview. Karthick Naren’s Unexpected Reply To Gautham Menon’s “Dhuruva Nakshathiram” Post !! Comment your views on this interview of the filmmaker !!