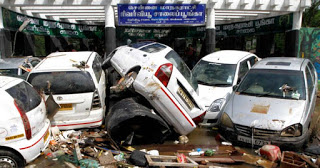 General insurers are likely to disburse claims worth Rs 2,500 crore due to recent floods in Chennai and three other districts, a senior industry official said.

G Srinivasan, Chairman and Managing Director, New India Assurance Ltd said the industry (general insurer) is expecting around Rs 2,500 crore for around 10,000 claims due to the floods in Tamil Nadu especially in Chennai and Cuddalore.

New India Assurance alone has has got 1,700 claims valued at around Rs 425 crore and expecting claims worth another Rs 75 crore.

Of the total, around 900 are non-motor claims, including fire and households, while the rest are motor claims, mainly from car owners.

“We are geared upto handle the huge demand of insurance claims and in quick disbursal of amount,’ said Srinivasan adding that his company disbursed claims worth around Rs 400 crore during Srinagar floods and Rs 500 crore in Vishakapttnam.

He also said in future general insurers may ask the policyholders to bear some portion of the loss.

“There will not be any hardening of the premium rates due to the flood losses. But insurers may increase the deductibles-that portion of the initial loss amount to be borne by the policyholders,” said Srinvasan.

People can give a simple request with evidence, which could be a photograph of the affected object. A surveyor will do the inspection in 24 hours and an interim payment will be made in 2-3 days, he said.

“The claim will be settled on cash loss basis. The insured/vehicle owner may get the vehicle repaired at his convenience later,” Srinivasan said adding that four general insurers have set up nine camps to settle the claims.

After last week’s floods, there will be not any change in insurance premium pricing there will be better underwriting, said Srinivasan.

“The impact in our balance sheet will be around Rs 50 crore,” Srinivasan said adding that a major portion of the settled claims will be recovered from the reinsurers.

He also said the claims for aircraft damage may be around Rs 200 crore, but none of the aircrafts that got damaged due the flooding of Chennai Airport is insured with New India.

Some aircrafts parked in Chennai Airport were damaged due to gushing water, said Srinivasan.