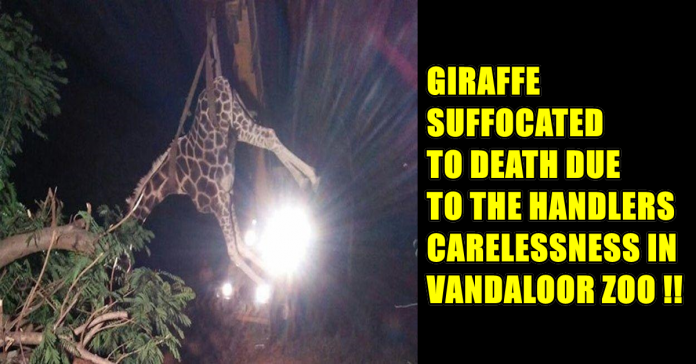 A male giraffe at Vandalur zoo, pelted by stones to enter its cage by an animal keeper, jumped into a slope and died in the impact on Thursday night. Vandalur zoo officials who remained tight-lipped performed a hushed up ‘autopsy’ and buried the critically endangered animal on Friday.

“Rahman, a 20-year-old giraffe, fell into an eight-foot deep trench inside its enclosure and suffered serious injuries. The zoo’s animal keepers used a crane to hoist the animal out. It was then shifted to the zoo hospital, where the doctors declared the animal dead at 11.50 p.m.,” zoo officials stated as per a reports in The Hindu. According to confidential zoo insiders,  the senior animal keeper trained to handle giraffe was on leave when the incident happened. On Thursday the animal keepers of the adjacent elephant enclosure found the deceased giraffe Raguman loitering in the open enclosure without entering its caged shed. To shoo away the animal the elephant trainers (kavadi) threw stones and howled at the hapless animal. Sensing trouble the giraffe ran helter-skelter in the moat and finally slipped into slope filled with water.

Rahman and his partner Ayesha, brought as a pair from Kolkata’s Alipur Zoo on December 22, 1998, under an animal excahnge programme, have been popular with visitors as well as animal keepers. Well past visiting time on Thursday, zoo officials said, the male giraffe remained outside the enclosure, while Ayesha went in. All attempts to coax it in failed and, finally, when some keepers tried to pelt stones at him in order to send him in. The frightened animal ran for its life. It slipped and fell into the moat on its back, causing the food it had eaten to choke the wind pipe, causing death, officials said. Higher officials and veterinarians rushed to the place and after a thorough examination, confirmed that it had choked to death. The animal was later removed from the place using a huge crane.

A retired veterinary surgeon said giraffes were highly sensitive and shy like deer. “In medical parlance, the sight of a giraffe bolting away from those trying to rescue it or push it into an enclosure is termed ‘flight response’ that can some times prove fatal,” he said.