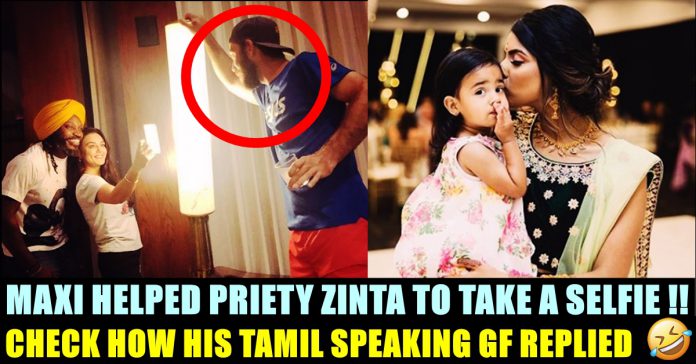 Australian cricketer Glenn Maxwell is currently busy playing for Kings 11 Punjab in the ongoing IPL tournament. Jimmy Neesham, a new zealand cricketer who is also playing for Punjab, uploaded a post in his official Instagram post in which Universal Boss Chris Gayle was seen posing for a selfie with his team’s owner Preity Zinta, a Bollywood actress who also owns the IPL team. In the post, Maxwell was seen playing the lightman role to make their selfie look better with enough light.

On seeing the post, Vini Raman, a Tamil nadu-origin girl friend of Maxwell, uploaded a cheeky comment only to grab the attention of the IPL fans. She said that she wants Maxwell to put same effort when they take selfies next time. She also made sure that there would be no excuse by adding it as a hashtag.

“this is the level of dedication I expect for our next selfie #noexcuse 👀” her comment read.

FAMILY. Thankyou @shevan_j_photography for capturing these special moments. Still can’t believe I’m lucky enough to have @gmaxi_32 + an amazing second family who have been so welcoming ❤️

Vini Raman and Glenn Maxwell are dating each other since 2017. The explosive batsman disclosed the news on Instagram few months ago, confirming that they two got engaged. Vini Raman, a 27 year old Tamil nadu origin, was born and brought up in Melbourne. The two have, reportedly, met at a Melbourne Stars event and have been dating for the past 3 years, and have been posting pictures with each other on Instagram for quite some time now. Vini is a pharmacist by profession.

Check out some of their social media posts below :

Recently, during a Q & A sessions with her followers in Instagram, Vini said that Superstar Rajinikanth’s Padayappa is her favourite film and she wants to show the film to Maxwell as soon as she gets a quality DVD with subtitles as Maxwell made her to sit through 100 hours to watch star wars, a Hollywood movie.

Check out the screenshot of her answer below :

Comment your views on this demand of Vini Raman to Glenn Maxwell !!