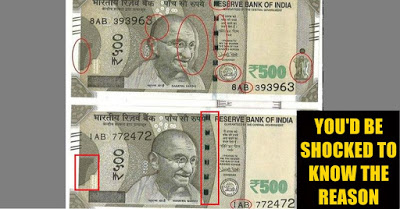 The above note has stirred quite a controversy. A person who had their hands on the 500 Rupee notes found out that there were two variants. Surprised? Read below.

After the demonetization and arrival of 2000 notes left people in quite a dilemma people were waiting for the 500 Rupee note to start getting delivered. But none expected that it’d bring a surprise along it’s way. The recently issued 500 Rupee notes much to everyone’s surprise had two variants of them. Well not exactly two variants but the rush made the RBI to print them in such.

“There is a more than visible shadow of Gandhi’s face, besides alignment issues with the national emblem on the note and even serial numbers.”

People have started arguing whether the government itself is supplying fake currency. People have started to wonder how many counterfeits these fake currency notes would attract.With just two weeks into circulation, the two variants of the Rs 500 note may encourage counterfeits, abolishing them was one of the main intents behind the government’s move to ban old Rs 500 and Rs 1000 notes.