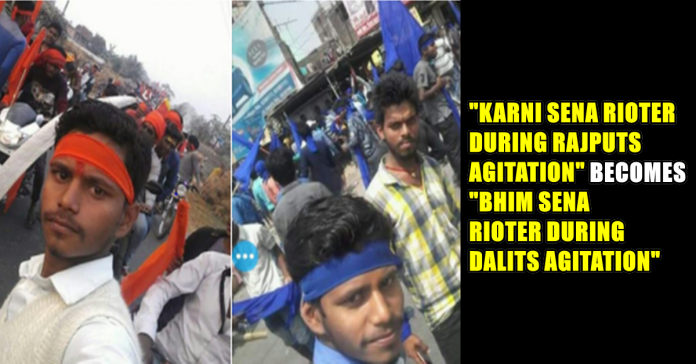 Photo of a man, who was seen protesting as Karni Sena member during Padmaavat controversy, has gone viral after he was now caught agitating during Bharath Bhandh as Bhim army supporter.

As a Karni Sena supporter, he can be seen brandishing a sword with a saffron band on his head, while as a Bhim Army protester, the colour of his band changes to blue.

This guy has a special kind of talent.

Was a Rajput during Karni Sena protests, transformed into a Dalit participating in Bhim Army’s violent protests during Congress’s Bharat Bandh call today.

Is he even a Hindu or one of the Congress’s hired momins? pic.twitter.com/MNO0kDPZv2

The photo left many social media users shocked. People on Twitter started questioning the authenticity of these protests and wondered if they were being engineered by political parties having vested interests.

This Guy Was A Karni Sena Member Few Months Ago, Today He's Part Of Bhim Army. These Tukdey Tukdey Gang Freeloaders Will Go To Any Extent To Divide Us. "Divide And Rule" Was Brought In By Britishers, Being Used By Italians Since Independence. #BharatBandh pic.twitter.com/Jdlm42gsLT

Is he a Hindu? Or paid worker of some political party?

Soon parody handles and Twitter comedians took over and gave a funny take on the “expose”. They wondered if the guy was just a “freelance protester”.

Similar flak staged couple of years back while Tamilnadu election where a same granny acted in the both DMK and ADMK advertisements supporting and blatantly blaming both the parties. While in one ad she says ‘Amma’ fed her, in another she says why vote for the incumbent government. This is evident that it is not new for the political parties in India to stage fake supporters and fake campaigners.