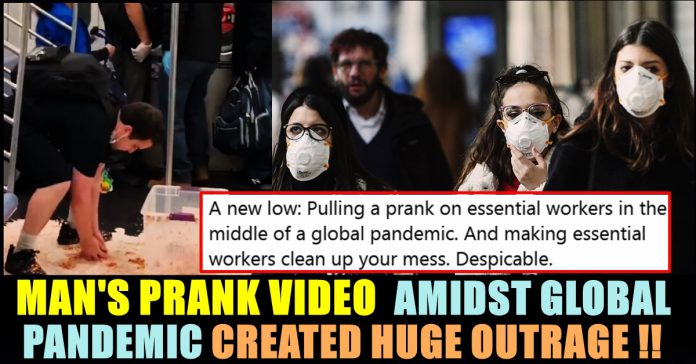 A guy named as Josh popkin who is known as prank Tik Toker is facing severe backlash from his followers and from the users of social media platforms for two of his recent prank videos. The video which received 6 million views combinely, shows the comedian spilling a crate of milk and cereal on the floor of an occupied New York subway car.

That particular video sparked huge outrage among the people of Internet and with some authorities reacting to it by describing it as “a new low” and “despicable”. Going by the Tik Tok name “fckjoshy” enjoys 3.3 million followers is facing the wrath of his own followers.

The comedian who is known for his prank videos such as making paninis during college lectures and breaking his mother’s furniture and pouring a crate full of Fruity pebbles and milk on himself, now became a subject to online criticism for his video on spilling the concoction on the floor of a New York subway car full of people wearing masks.

does he think this shit is funny…. pic.twitter.com/tXTRJXUGjr

The official twitter account of New York’s Metropolitan Transportation Authority wrote “A new low: Pulling a prank on essential workers in the middle of a global pandemic. And making essential workers clean up your mess. Despicable. “ on seeing this stunt of the prankster.

Social media users of the both the platforms called him out and slammed him for his insensitive behaviour. Many people demanded an arrest to take place against him and so many other worried for the workers who cleaned and sanitized the place before Josh spilled milk and cereal all over it.

“NYPD should find him and make an example of him. Not acceptable” wrote one of a user whereas another one wrote “So workers took their time SANITIZING ALL TRAINS just for this clout seeking saltine to spill his TUB of fruity pebbles all over?!? “

So workers took their time SANITIZING ALL TRAINS just for this clout seeking saltine to spill his TUB of fruity pebbles all over?!? He should be fined and arrested the same way that young man from Cali was arrested for eating a sandwich on the platform…

I don't think I've ever heard such a punchable voice.

A similar video of the same guy in which he was seen walking around with a hole cut into a mask. That video of him received more than a million views.

https://t.co/5lyt3OTKvE he also doesn’t know how to wear a mask apparently. @NYCMayor @NYCTSubway @NYCMayorsOffice @nyc311 really disrespectful to put the rest of the city at risk and make essential jobs even harder at a time where we all need to be working together. pic.twitter.com/P8AduO6Ior

It is notable that MTA reported that the first death of a worker took place in March due to coronavirus and more than 1500 employees of it tested positive for the virus by early April. As people are dying to do their service, this act from the prankster, irked public in big time.