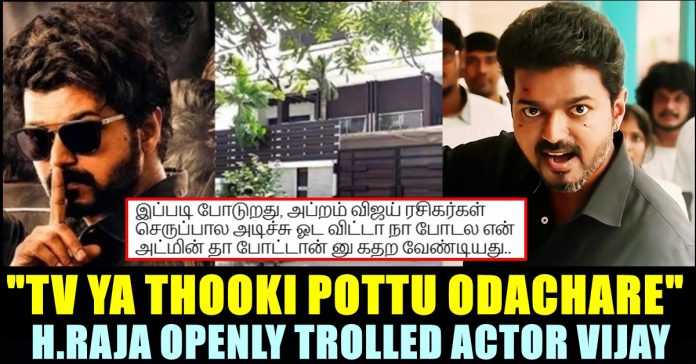 Income Tax department officers has found Rs.65 Crores during raids on the powerful financier in the Tamil film industry, according to NDTV. It is notable that the officials questioned actor Vijay in the shooting spot of his upcoming film “Master”. The properties of AGS Cinemas and film financier Anbu Chezhiyan were searched and actor Vijay was questioned in the sets of “Master” regarding an alleged tax evasion case. The home which belongs to Vijay in Chennai was searched on Wednesday.

“The counting is still going on and the total seizures is likely to go up.” an official said to the media who informed that their probe revealed unaccounted transactions between financier Anbu Chezhiyan and actor Vijay after which the actor’s home on East Coast Road outside Chennai was raided. The questioning continued today, according to reports.

“The AGS group and financier Anbu Chezhiyan were under our watch for quite some times with regards to their films” said an officer. It is notable that “Bigil” was produced by AGS entertainments and the film was produced with Rupees 180 crores of budget.

Meanwhile, H.Raja, a popular politician of BJP party who confronted with the actor in previous occasions, has posted a tweet mocking the actor. Posting a news paper cutting of an unknown daily which said that Rs. 24 crores of cash and Gold jewels were confisticated from the actor.

Sharing the news, H.Raja mentioned Vijay’s activity in the movie “Sarkar” where he would break the freebies provided by government. “This Hero broke the free television provided by government in his film. Honesty?” asked Raja in his tweet. “இலவச டிவியை வீசி எறிந்து படமெடுத்த வீரர் ஆயிற்றே. நேர்மை?”

H.Raja, one of the most popular politician of BJP party. He known among Tamilnadu based social media users for his controversial statements. His remarks on the film Mersal’s GST and Digital India monologues, created huge controversy during the film’s release. Few believed that the film’s mileage increased only after the controversy created by Raja.

On seeing this tweet from the politician, many fans of the actor stormed into the comment section and thrashed the politician. Check out some of their reactions below :