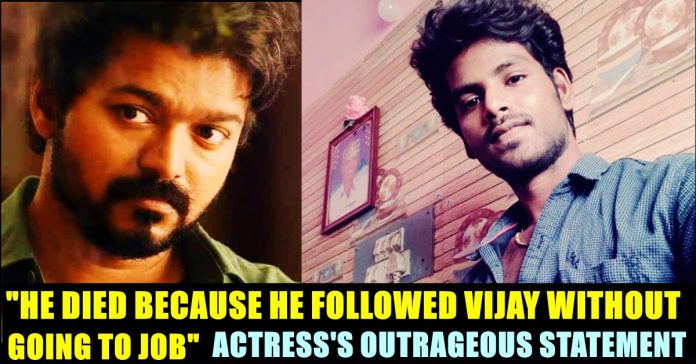 Not many days ago, a youngster named as Bala committed suicide due to the depression he was going through in his life. He who identified himself as an ardent fan of actor Vijay in Twitter, made headlines for the tweets he posted before killing himself. Now, former Bigg Boss contestant Meera Mithun came up with a video saying that his family would have got fed up with Bala for being jobless and constantly following actor Vijay. She said that Bala could have killed himself due to the pressure gave by his family for being a Vijay fan. Her statements created outrage among the fans of actor Vijay.

An ardent fan of actor Vijay, named as Bala, killed himself due to unknown reasons and his final tweets were trended in Internet with heartbreaking reactions. The youngster has been hinting about his decision through his tweets but none of his fellow online users took it seriously which is evident through their replies. Journalist Sonia Arunkumar, with whom Bala interacted once in Twitter, had called his brother-in-law in Kallakuruchi who confirmed his death.

In one of the several tweets he posted two days ago about his decision, Bala said that he going to leave the world without watching his idol’s film “Master” and without meeting his idol in person. He tagged actor Vijay’s official twitter account and expressed his love towards him for one last time in the tweet.

In the very last tweet Bala posted, he thanked everyone who respected him and showed love and support. “I gained more friends here. I was happy here and that’s enough. My love will always be there for you all. I wish everyone to be happy always” he said in that tweet.

In another tweet, Bala said that it is not a love failure problem but a problem in his own house. “Everyone hates me” he said’.

Now, addressing about his demise, Meera Mitun has said that the boy killed himself due to the pressure he faced from his family members for being a Vijay fan. She who slammed the Tamil nadu media, said that the journalists glorified bala’s death. “The one who died would have kept talking and writing about that one particular actor without taking care about his own life and family. The family members would have got fed up and pressured him to go to job. He died only due to that pressure” said Meera Mitun.

Meera Mitun has been accusing actor Vijay and his fans for past few weeks as we all know. Check out some of the reactions she received for this tweet :

Comment your views on these allegations of Meera Mitun !!