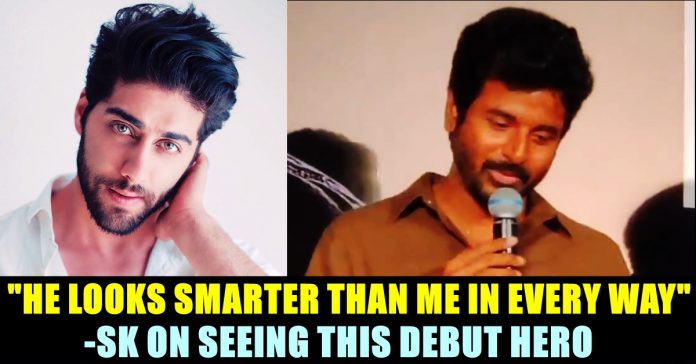 Oscar winning A.R Rahman turned a story writer and producer through “99 songs”, a film which was directed by a debutant named Vishwesh Krishnamoorthy. The film marks the feature film debut of Ehan Bhat as a hero. The ensemble cast of the musical drama includes Edilsy, Tenzin Dalha, Lisa Ray, Manisha Koirala, Rahul Ram, and Ranjit Barot. Ahead of the film’s release, A.R Rahman conducted an event having the top musicians of Tamil film industry as chief guests along with some of the stars.

Sivakarthikeyan, S.J Suriya, Anirudh, Yuvan Shankar Raja, G.V Prakash are some of the celebrities who took part in the event. “The film is inspired by the real-life stories and experiences of other musicians. I think the credibility for music and music as a profession is still not there. We have entertainingly touched upon several layers.” said A. R Rahman while talking about the film.

Meanwhile, a video of Sivakarthikeyan who is known for his humorous stage speeches, making fun of himself by comparing him with the lead actor of “99 songs” surfaced in the social media platforms. Sharing the video, A.R Rahman said that he feels happy to share the joy of cinema with his industry colleagues.

“While seeing him (Ehan Bhat), I thought he looks smarter than me with his skin colour, sharp eyes and outfit. I saw myself once and realized that I couldn’t become smarter like him. He wouldn’t understand any way, it’s better.” said Sivakarthikeyan and left hall to roar in laughter. The actor translated it in English to Ehan.

“I thought of changing like him and decided to do it in my next life.” he added before praising A.R Rahman. “I have grown up with your music and hoping to grow more with the songs you have worked for my Ayalaan”. said Sivakarthikeyan to Rahman at the event.

Sivakarthikeyan also shared his experience of interviewing A.R Rahman for the first time while working for Vijay Television as an anchor.

Sharing the video in his twitter timeline, A.R Rahman wrote “What a feeling ..it is… to share the joy of cinema with industry colleagues and superstar friends ….thanks for coming. joy , humour, respect and pure love” to express his happiness.

What a feeling ..it is… to share the joy of cinema with industry colleagues and superstar friends ….thanks for coming 😊joy ,humour,respect and pure love ❤️ https://t.co/Dj3Btv1x2p