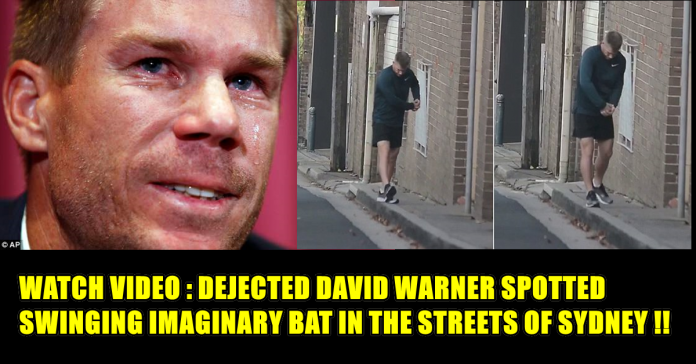 Disgraced ex-cricketer David Warner has been spotted taking a swing with an imaginary bat during a rare public outing in Sydney.

The former Australian vice-captain appeared to be missing his sport more than ever following the cheating scandal that saw him stand down from his role in the national team.

The family, who recently suffered under an international spotlight, were on their way to the dance class of Ivy Mae and Indi Rae Saturday morning. Warner masterminded a shameful ball-tampering plot against South Africa last month which resulted in him accepting a year-long ban from the sport. He was alleged to be involved in discussions during a lunch break when Australia was playing in Cape Town against South Africa on March 24.

In the wake of the ball-tampering scandal, Warner delivered a press conference in which he repeatedly ignored questions, as his wife, Candice, sat expressionless. Warner was widely criticised for his heavily scripted and melodramatic performance, where he spectacularly failed to shed light on the decision to cheat.

He refused to answer questions on who was responsible for the plot during the conference at the Sydney Cricket Ground.

Warner, along with former captain Steve Smith, was left with his reputation in tatters following the scandal, which also reportedly left the pair significantly out of pocket.

Before the ball-tampering scandal scandal broke, Smith earned $2million while Warner took home$1.4m from their central contracts with Cricket Australia.

This encompassed their base salary, plus bonuses for appearing in Test matches, one-day internationals and T20 games.

Neither will be eligible to receive their regular hefty sums while they serve their year-long bans.

Both players will also take a hit from losing out on their lucrative $2.4million contracts to play in the Indian Premier League – the world’s most high-proflile T20 competition.