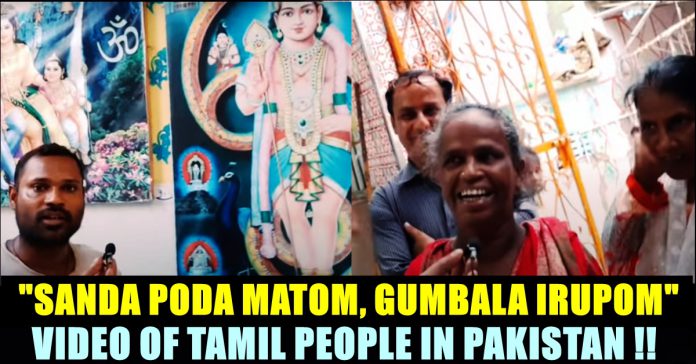 Amidst the tension that is constantly taking place between India and Pakistan due to various reasons, a Pakistan based vlogger named as Sameer Kay made a video on Tamil nadu based people living in Karachi, a prominent city of Pakistan country. In the video, we could also see a number of Pakistani people embracing Tamil language and trying to speak it in front of the camera.

Throughout the video Sameer interacts with the small group of people who are worshipping Tamil gods such as Murugan, Samayapuram Mariamman etc. When he asks one of the woman who immigrated to Karachi from Tamil nadu if her neighbours are fighting with her, she, without a second thought says that there is nothing like that happened. “Rather, they would protect us , if any fight takes place between the two countries, they would protect us” she says.

Sameer also made them to show the Hindu temples that are built in the place located in Karachi, Pakistan, a country in which almost all of the people are following Muslim community. Watching the video, we could understand that there more than 1000 Tamil speaking people are living in that place along with the Pakistani people.

The woman named as “Remi” who communicates with Sameer in Tamil says that she is a mother of two daughters and a son. “We won’t fight. We will be united together always.” says Remi when she was asked about her relationship with her neighbours who are from Karachi. She also can be seen teaching Sameer Tamil words on his request. “Neenga Epdi Irukeenga” (How are you) says Remi to Sameer who stumbles to pronounce it back with a bit laughter in his face.

Ramkumar, another man from Tamil nadu says that he is fine in Pakistan with no problems. Sameer further asks Remi whether she knows about Rajinikanth, Remi answers by saying that she knows actors like Rajinikanth and Vijayakanth from South. Ramkumar intervenes and says “Suriya is a good actor”. “Vijaykanth is my favourite actor” he adds. Remi recollects about MGR and Sivaganesan and endorses their acting skills.

The much needed positivity made people who watched the video to melt. On watching the video, many people from Tamil nadu got excited and poured their love in the comment section. Check out some of their reactions below :

Comment your views on this lovely bonding shared by the people of both the countries !!