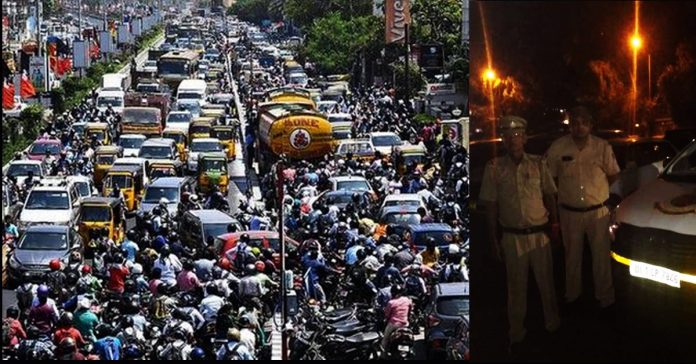 India is a country with the second largest road network in the world. Out of the total stretch of 5.4 million km of road network, almost 97,991 km is covered by national highways. Being known for its highest population, the traffic problem in the roads in Indian cities is never ending one. However, most probably for the first time, Traffic in India has helped a citizen and saved his life.

The Delhi Police on Sunday said that they had arrested a member from a gang of carjackers after a person was kidnapped from Mohan Garden in New Delhi.

The victim identified as Rijwal, a native of Shimla, was rescued by the police within seven minutes after the incident of kidnapping was reported, the DCP (operations) Sharat Kumar Sinha said. His car keys were snatched by the kidnappers before they took him to his vehicle, parked near an institute in Janakpuri.

According to the police, the victim’s brother had informed that four men had kidnapped his brother from Janakpuri and the word “high lander” was written on the car’s windshield.

The police immediately swung into action and started looking for the alleged car, which they found near a red light in Uttam Nagar.With kidnappers realising that they were being followed by the police, three of them managed to escape through the traffic jam at Najafgarh road. The police, however, managed to nab one of the kidnappers, and rescue the victim.

Police recovered Rs 1,650 and and the victim’s car which was robbed by the kidnappers. A case under various sections of Indian Penal Code has been registered against the accused.

According to the DCP (operations) Sharat Kumar Sinha, “A PCR team then mounted a chase and spotted the car near the Uttam Nagar crossing while the driver was frantically trying to get past the traffic jam to reach the Najafgarh Road,”

It is happy indeed to realize that the same pathetic traffic jam which makes us late every time to reach our destination, has saved a young life from vicious Kidnappers !! Comment your views !!