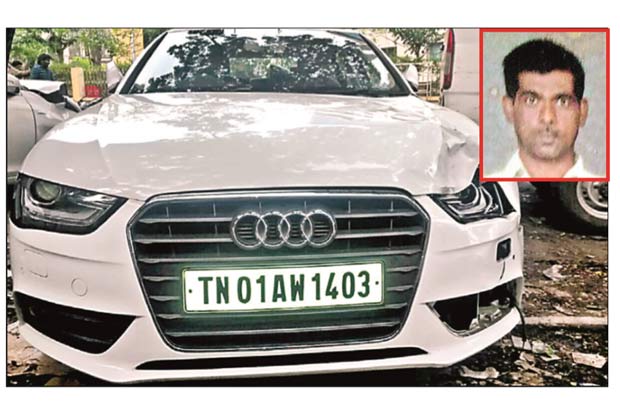 In Thiruvanmiyur’s PTK Nagar, neighbours ask in hushed, somber tones whether Govindamma has eaten since her husband Munnusamy’s death. Govindamma sits outside their dimly lit one-room house, running her fingers along the ridges of her red and blue bangles. She pushes aside a plate of milky rice.

At 4am on Saturday, Munnusamy was leaving for work, crossing the road to begin his day as a load carrier. His wife had never seen him wake up so early, but it was after a long time that he had managed to get work. Her husband was on a steady streak of daily wage jobs and she didn’t want to worry him. Entering the arterial OMR road, he was suddenly hit by an Audi at a U-Turn and flung into the air on impact. The car did not stop until municipal sweepers intervened and stopped the car.
Within 10 minutes, three young women, inebriated and returning from a party, stepped out of the car. Munnusamy’s wife and two children Divya and Karthik who had rushed to the spot watched on as the women could barely stand, balancing themselves on the bonnet of the car. “Sorry,” coughed up Aishwarya Wilton, the woman behind the wheel. Aside the car, they watched Munnusamy’s mangled body being swiftly covered up before any photographs could be taken.
The first test by the police found the alcohol level of the driver to be above 30 mg BAC. A case was filed against Aishwarya Wilton under section 304 (II) of the IPC. The accused is an engineer, her father Wilton Rulan is a top insurance surveyor.
But Govindamma says she will somehow fight the case. “What do we want from them? Nothing. I can never get my husband back.” Govindamma, the victim’s wife
Her son Karthik is in the 11th standard, and her daughter in the 6th standard. “He was a good kind man, who gave to people even when he was poor. He had no bad habits except for his beedis,” says Karthik, stopping intermittently to ask his mother to pace herself.
“We were told that if we had rushed to the spot and started intimidating the women, we would not have a police case in our hands. But because he lay there on the road and the car was stopped, the police had to intervene. I don’t understand how this makes sense. The police is obviously on their side,” says Govindamma.
A police official had spoken to TNM earlier and noted that this was a case involving “unmarried, drunk women,” and should therefore be treated carefully. “For them, that seems to be the most important thing, not the fact that it was the murder of a poor, innocent man,” says Govindamma. A case of culpable homicide not amounting to murder has been filed against the driver.
For now, the concern is about how to arrange for food next day, just as much as it is about getting justice. “We loaned everything for the funeral, and I am being told that I will be a bad wife and a disrespectful woman if I leave the house for work for the next three months. That is our custom, the widow can’t step out” says Govindamma. She used to work as part-time  house help.
“We know she will get bail. After all, there is no value for a poor man’s life,” says Karthik, rubbing the dust off a family portrait to outline his father’s face.
But one memory seems to haunt them most. “That the one word she chose to say – sorry. For taking a man’s life and continuing to drive on the same road,” says Govindamma, quietly declining another nudge towards the plate of milky rice.
source – TNM