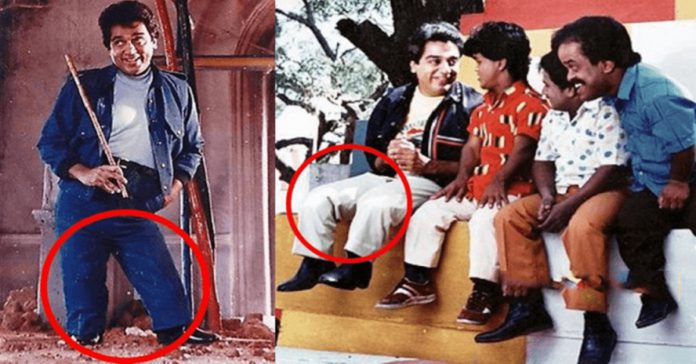 There have been many lost and found films made in India. But director Singeetham Srinivasa Rao, Kamal Hassan and writer Panchu Arunachalam gave this age old formula a unique twist with Apoorva Sagodharargal (dubbed in Hindi as Appu Raja). What sets this story of estranged twins (Kamal Hassan and Kamal Hassan) apart from other films of its ilk is the character of the innocent looking midget Appu –  one of the twins who avenges the death of his father through unique ways.
The character of Appu played to endearing perfection ranks as one of Hassan’s best performances. How Kamal Hassan managed to play the role of a midget is one of the best kept secrets of cinema. Its been more than two decades since the film was released, yet no one had been able to find out the answer till now. Once again, the amazing Quora helped us to find answers to the question that has intrigued movie buffs for a long time.

We stumbled upon these detailed responses by Goutham Sankara Krishnan and Vignesh Natarajan that provide great insights on they transformed Kamal Hassan into a midget.
“Ok. This is one of the best kept secrets of the world movie industry. Similar to the number of talents that Kamal has, the answer to this question is multiple. I will try to provide the info I have gathered and my own personal assumptions/research that I did for answering this question.
Disclaimer: I have tried to decipher as much as possible but then it is easy to speculate sitting in front of a laptop and pausing and forwarding the video. This is just a humble attempt to try what a movie genius did by a movie fan. We can confirm and know only when Kamal himself explains it which I think he may not. We can only speculate.
While doing research, I read in a blog that Kamal had promised that he would release a short film, something like “Making”. I am not sure when he will do that.
Anyway, I chanced upon an article of an audience interaction by Singeetam Srinivasa Rao (the director of the movie). Rao credits three people for pulling it off: Kamal himself, P.C. Sriram and a set boy who is called by his nickname ‘Japan’. Who Japan is, will remain unknown like the Tank Man but we movie buffs are indebted to him.
Mr. Rao has detailed some of the techniques that they used. You may read the article here.. but I will anyway mention it here.
There were different angles in which Kamal was shown and hence there were different techniques involved.

A pair of special shoes was prepared to be attached to the folded knees of the actor.

Kamal held his arms in a particular way so that it jelled with his “dwarf” legs. You can see that dwarfs are stunted in their hands too and they are always a bit folded in the elbow. (Sorry if I am politically incorrect anywhere with the terms used)

A trench was dug up just to cover up the actor’s legs from the feet to knees, with special shoes attached at the knee level. Japan took all the care in ensuring the correct depth of the trench and level for the camera. Mr. Kamal Hassan practiced for 15 days to make sure that his walk in the trench really looked normal “at the ground level.” When the actor had to be static, a pit was dug instead of a trench and this also helped the director to go for crane shots.

To give more authenticity, an artificial leg was prepared with strings attached to it. This was used when the actor was sitting on a chair or dancing. An engineer Vasudevan prepared the leg and Mr. Srinivasa Rao’s nephew Poorna operated the strings.

A few other techniques like mask technique were also used. An 18-inch high platform was created to shoot side angle shots at places where the earth could not be dug up.
When Kamal was with a real tiger in the movie, everything was silent and Rao gave hand signals (probably) as instructions.
Now I will try to explain whatever I have tried to find after pausing and pondering over the below video for many times. Pause and play wherever you wish.
Till 0:39, it is only close-up shots. So it is easy. Nothing involved.
At 0:39, you can all the dwarf people sitting on the wall. Pause! Look closer.
You can see the difference between Kamal’s hips and the others’ hips. Kamal’s hips are not visible. But the legs are bent. There are two possibilities.
Lets move on.
0:47 to 0:50 – I have no idea! Please give your idea in the Comments.
0:51 to 0:55 – Now this is easy. You can see the difference between how Kamal moves and the others move. Only the upper part of the body moves for Kamal. The legs are stiff. Particularly, there is nothing at the ‘knees’ of the dwarf. And his friends are two steps behind him. At 0:55 you can see that the red shirt guy is at one arm distance but the other two are almost the hugging the one in front of him. Clearly, Kamal is standing inside a block/pit and the others dancing on the wooden plank.
1:01 – The Tarzan is not Kamal. Some other guy.
1:10 to 1:15 – Special shoes that Mr. Rao told us are at work.
1:20 to 1:27 – Kamal is standing on a tall platform erected behind the asbestos wall. Again, special shoes.
1:28 – The somersault is by a dwarf stuntman.
1:32 to 1:38 – Kamal is standing inside a pit with the special shoes.
1:42 – This is pretty tricky! He is in a position similar to how he was at 0:40, but then he actually places on leg on the other. This might be where the artificial leg was actually put in use. It was not moved with strings but it is movable/bendable at the ‘knee’ portion and Kamal just bends and places it on the other leg.
1:46 – Kamal is probably standing on another platform which is moving along the train and shaking his legs with the shoes attached to his legs.
1:49 – A slanting platform and Kamal moves forward. A pictorial explanation would be much helpful in this but to be short, Kamal is just moving on a similar slanting platform that is not visible to us. The shoes are fixed to the left side of his legs (near the knees) so that they are visible to us. Simplest trick to execute this I’d say.
1:57 to 2:05 – Kamal is standing inside the box. The thighs are made of a pillow or cushion type of material and placed. There must be artificial legs moved by strings. Or someone (X) is kneeling down just behind the box and the thigh portion is made of X’s hands and the knee-ankle is made of X’s elbow-wrist. X’s palm and fingers are inside the shoes. A difficult movement to execute I’d say.
2:28 to 2:30 – You can see the difference between how they shake the hips and legs. Kamal is clearly standing with his knee-ankle inside the box. That type of movement is done only by your thighs. Compare the ankle portion of Kamal and the guy next to him.
2:45 to 3:00 – Brillianto! You think the elephant is lifting the dwarf but it need not be so. The legs are not shown 🙂
3:50 to 3:56 – Maybe Kamal is standing on a long trench and just walking backwards. The shoes are attached to his knees. But I very much doubt if he could create such a movement doing that.
4:03 to 4:15 – Oh my god! Would you believe it? This is tough!
a1) 4:03 to 4:05 –He is lying down; his leg is bent; they move; his upper body is bent backward. This is the toughest one to figure out (atleast try to understand). Lets us come back to this later.

But there could be something. In this portion, when Kamal moves backward, the leg moves backward (relaxed) and when he moves forward, the legs move forward (bend). So maybe dummy flexible legs were built and tied to Kamal’s hips so that they move as Kamal moves. Possible? Maybe. Feasible? Maybe. Could Kamal have done that? Yes! The man used a friggin’ Rube Goldbergian contraption in the movie.
a2) Coming back to the lying down part, you can again see that his hips are not visible. And, when Kamal places his hand on his head and dances, only his upper body moves. His legs remain static; not a single movement. So, definitely there are two pieces involved. Kamal might be lying down in the angular raised platform (4:06 to 4:14) and is bending backwards a bit and doing the upper body part. A dummy doesn’t sound good as it can’t be moved. The upside-down man is not possible I believe as there is a fake knee created in the right leg. So maybe the stringed artificial legs are at work here in some way. But I am still not convinced with this.”
And here’s the response by Vignesh Natarajan that tries to shed some more light on how they achieved this amazing cinematic feat.
“Kamal Hasan is someone who travels the extra mile almost always to do something extra resulting in something extra-ordinary. And Aboorva Sagodarargal is one such brilliant effort.
I am no more qualified to answer this question than the average Tamil Cinema fan because Kamal’s homework and the make up (special efforts) to play Appu’s character is one of the best kept secrets in the industry so far.
Nevertheless, there have been quite a few speculations about the effects that were used. Though I would like Aniruddh Sudharshan to post whatever research he has done on this subject, I would go ahead and list out some obvious speculations.
Kamal Hasan for the most part acted out the scenes whilst he was on his knees. This could be possibly true as you can notice in this image. The legs are uniformly wide.

And in a few scenes he might have used some architectural assistance. for example, in the following image he could have been standing from inside the the wooden structure and the legs could just be a dummy while the other three actors were actually sitting on the wall. This is just my speculation.

He might have used some camera alignments to his advantage which I think Gaurav Dutta would have tried to study.

As suggested by Sudarshan Varadarajan here’s an interview where Kamal discusses the techniques:”