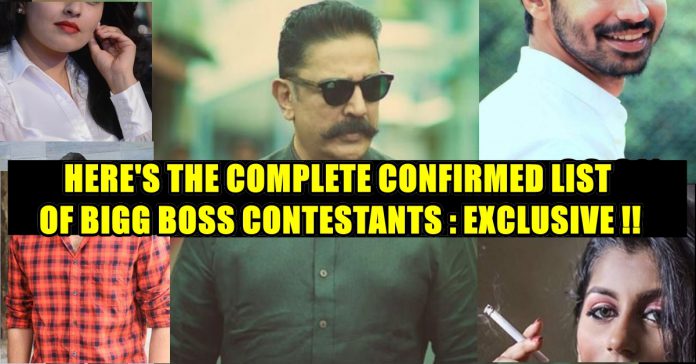 The much-awaited reality TV show Bigg Boss Tamil will be returning with its second season in about two weeks from now. According to sources, the show will begin Today. The show’s producers have stepped up the promotions with new promos. Tamil superstar Kamal Haasan has been retained to host the upcoming season. The latest promo suggests that this time the show will explore the concept of “who is the hero and who’s the villain,” an existential question that has followed Kamal since Nayagan.

Several names, who are said to be the probable contestants, are doing the rounds. Power Star Srinivasan, actor Bharat, Kasthuri are rumored to be likely contestants of the show. The showrunners, however, are also not keen on revealing much.

Bigg Boss Tamil Season One instantly became one of the most watched televisions shows among the Tamil audience last year. The viewership of the show was pegged at 6.5 crore impressions worldwide. “Bigg Boss Tamil has written a new chapter in the history of South Indian television entertainment and that still would be an understatement. Thanks for giving me such a big success in my career as a television host. I consider it as a big fortune,” Kamal had said during the finale of Bigg Boss Tamil Season One last October.

Now the complete list of the contestants was released. And here it is :

Apart from these 5 contestants 10 more contestants are confirmed to be participated in this 100 days show.

Mahat Raghavendra (born 18 February 1987) is an Indian actor who predominantly works in Tamil and Telugu cinema. He is best known for his role in Ajith’s action thriller, Mankatha and Vijay’s Action drama Jilla. Janani is an Indian actress who predominantly appears in Tamil and Malayalam movies. She started her modelling career during her studies and appeared in over 150 television advertisements before getting signed by director Bala to essay the lead female role in the Tamil feature film Avan Ivan. Shariq Khan is son of Riyaz Khan who famously known as “Kattadhurai”. Shariq is a growing actor who acted in G.V. Prakash’s movie, Pencil. Aishwarya Dutta made her acting debut with Ramprakash Rayappa’s Tamizhikku En Ondrai Azhuthavum (2015), which opened to positive reviews and box office collections. She then featured as Kajal Agarwal’s sister in , Paayum Puli (2015), In 2016, she was also seen in mystery film Aarathu Sinam alongside Arulnithi and Aishwarya Rajesh. Mamathi Chari is an Indian Actress, who is working in Tamil television industry. She was born in Chennai, Tamil Nadu. Mamathi made her debut in the Tamil television show “Hello Tamizha” talk show. She also acted with well-known actors. She has appeared in some well known tv shows such as Jillunu oru Jodi, Jiillunu oru challenge and Rani Maharani. He began his career in Star Vijay as a television actor. He appeared in the third part of the serial Kana Kaanum Kaalangal as Shiva. Later on, he played the role of Murugan in the serial Saravanan Meenatchi.  Further, he was approached to play the main lead in its sequel. His role as Vettaiyan aka Saravana Perumal is breakthrough point of his career which made him popular among audience. He also appeared in the film Indru Netru Naalai in a cameo appearance as heroine pair. He has hosted the many reality shows. He appeared in the movie Sathiriyan .     His upcoming film is Natpuna Ennanu Theriyumaa as the lead role along with Remya Nambeesan. However the list is confirmed the source said that there might be last minute alternations. But as of now this is the final list it is believed. Let us wait and watch till tonight.