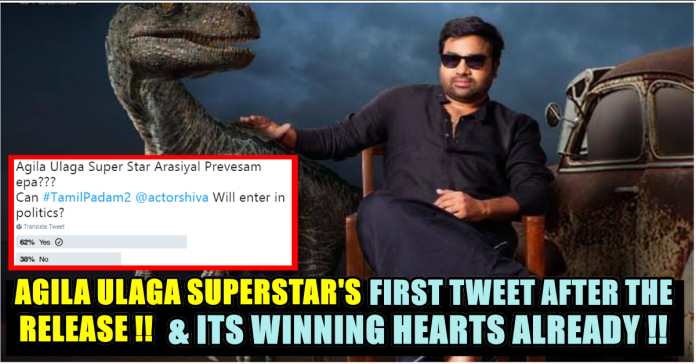 Shiva and CS Amudhan’s Tamizh Padam 2 finally hit theatres today. Last month the makers released a 40-second teaser that made us ROFL. In the teaser of Tamizh Padam 2, the makers trolled several politicians and big wigs of Tamil cinema. Right from Rajinikanth to Ajith, the makers did not spare anyone. In the film, there are references of Tamil films like Vijay Sethupathi’s Vikram Vedha, Ajith’s Vivegam and Mankatha and Vijay’s Mersal and Thuppaki and Rajinikanth’s Kabali. Twitter is cracking up with the way the makers have trolled Kabali and Vivegam in this one.

More than any other Tamil film, it is Siva’s upcoming spoof Tamizh Padam 2 that is the most-awaited one of all.

The second part of the first spoof movie of Tamil cinema is all set to make fun of the cliches of K-Town and Tamil Nadu. Now, the film is released.

The trailer and teasers suggest that this time, the film has not spared politicians either. From films of Superstar Rajinikanth to Sivakarthikeyan’s Remo, the film takes a dig at everything that’s popular in Tamil Nadu.
Starring Siva, Disha Pandey, Iswarya Menon and Sathish, Tamizh Padam 2 is produced by S Sashikanth of Y NOT Studios, which also bankrolled the hit film Vikram Vedha. Apart from movies that acted as prey for this “parody” there are lot of “political” moments that are brutally trolled.
Though the film’s director is super active in twitter communicationg with people so much, the protagonist “Shiva” won’t be seen ofter in the social media platform. Even the production company “Y not studios” and the producer “Sashikanth” seen promoting the film. But we couldn’t find the hero active for which the fans were waited a lot to know whats in his mind.
Here’s the tweet from the actor himself :

Thanks for all your blessings,prayers, wishes and most importantly ⭐⭐⭐ for the amount of Love showered 💕⭐⭐⭐The most important thing is to enjoy your life and to be happy—it’s all that matters. You r amazing brother… Great keep it up… Keep going …Waiting for Tamil Padam 3.0😂😂…. Probably u will be in the position of getting ready for the next part. Since every week there is almost three to four films are coming now a days.. Be ready😊😊👏👍

What do you think on his lovable tweet and fan’s response ??