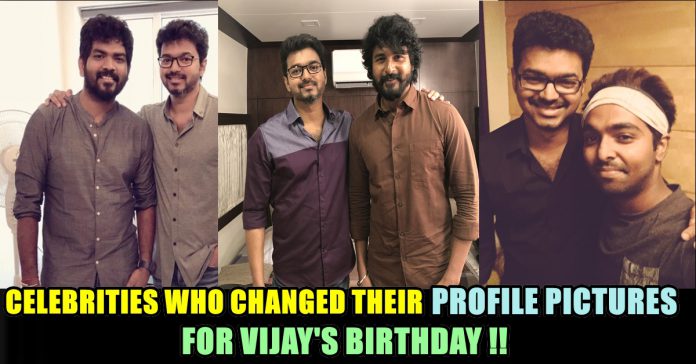 Vijay’s first film as a lead was his father SA Chandrasekhar’s 1992 directorial Naalaiya Theerpu. In a sweet note, SAC (as he is popularly known) introduces his son as the hero. “I leave the future of my son Vijay in your (the audience) hands. You all have showered myself and Shoba with love. We hope that our son gets the same love and warm welcome as well.” It is quite fun to read this in 2018 when Vijay is one of the biggest stars Kollywood has produced. The announcement of when the first look poster of his upcoming film would be unveiled had set social media on fire. So you can imagine, the response his 62nd film Sarkar would receive. I don’t think even SAC would have predicted the degree of love that Vijay is showered with now.

Vijay was first credited as ‘Ilayathalapathy’ in the 1994 film Rasigan, again directed by his father SAC. In a 2010 interview, Vijay admitted that he is a huge fan of Rajinikanth and that the time he entered films was around the release of Thalapathi. Someone seemed to have made a connection and called him Ilayathalapathy. The name just stuck. After initial failures, the young actor tasted some success with Vishnu, again helmed by his father SA Chandrasekhar. And then Vikraman’s Poove Unakkaga happened and things were never the same again. One can easily categorise Vijay’s film career into three phases – the lover Vijay, the fighter Vijay and the star Vijay. After Poove Unakaga’s massive success, Vijay mostly stuck to romance and family dramas. The actor was slowly climbing up the ladder with some interesting collaborations (Once More with Sivaji Ganesan, Nerukku Ner with Suriya) and hits. And then Kadhalukku Mariyadhai happened. Fazil’s take on inter-religion relationships turned out to be a blockbuster. Vijay was in a comfortable space. The actor continued to explore romance, relationships, drama, humour, dance and a bit of action. He had five back-to-back successes — Kushi, Priyamanavale, Friends, Badri and Shahjahan. This was followed by Tamizhan, arguably the first dominant ‘message movie’ from the Vijay stable. Not very far after, Bhagavathi will mark the second phase, one that will be filled with action and ‘mass’ elements, laying the ground for ‘Star Vijay’ to kick in.

After the success of Ghilli, Thirupachi and Pokkiri, Vijay seemed to have found a new operational zone. Maybe, he got a tad too comfortable. Back to back failures rolled out ending with his 50th Sura turning out to be a massive dud. It was time for course correction and here begins the chapter of ‘Star Vijay’. I call this phase ‘Star Vijay’ not because he gained stardom only during this period. Rather, it seemed like that he now knew how to handle it. Vijay understood what his fans expected from him and what he could do in the star space he had. With a recalibrated comprehension, Vijay started picking scripts that were different but didn’t impede his star image. Kavalan, another successful remake, marked the new phase in Vijay’s career. Both Velayudham and Nanban were well-received. And then Thuppaki happened and the box-office star we knew was back. A few hits and misses again, Mersal saw Vijay reclaim his box-office hold, in style as Thalapathy Joseph Vijay. And for this special day, most of his celebrity fans changed their profile picture as Vijay’s picture and wished him “Happy Birthday” !! Here are some of them’s twitter post :

Happy happy bday to dearest @actorvijay brother. May u win as always and wishing u loads of success and happiness in whatever u do. God bless. Happy bday @actorvijay na have a lovely year ahead … pic.twitter.com/ldEXxBcY8M

Many more celebrities and fans wished Vijay on his birthday. Well , what do you wish to say on the terrific actor’s birthday ??