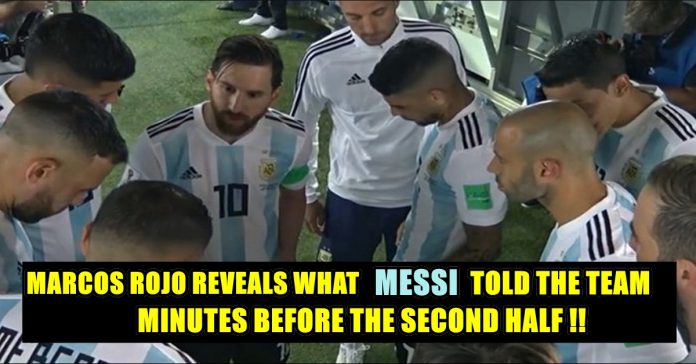 The thrilling match between Argentina and Nigeria in FIFA World Cup 2018 came to an end with the former winning 2-1. While Lionel Messi, the Argentine captain, scored the opening goal ensuring a great start to the team’s performance, it was Marcos Rojo’s goal during the last minutes that made the team win. Undoubtedly, the Argentine team were under tremendous pressure but they were motivated and determined. Ahead of the second half, Messi was seen engaged in a pep talk with the teammates.

It was a crucial match for the Argentines – who had been facing a risk of elimination after losing to Croatia. The first half ended with Argentina leading 1-0. Rojo, the Argentine defender, later revealed what his captain had told the teammates minutes before the second half. “During half-time, Messi said that all of us have the duty to score so whenever we get the chance, we shoot, no matter our position,” Rojo told reporters. Talking about his winning goal, Rojo added, “So when I saw that ball coming towards me, I kicked it in with all that I had in me and [laughs] it went in!” Messi’s conversation with his team-mates ahead of the second half proved to be a morale booster for the team as it helped them counter the penalty equaliser by Nigeria. By winning this match, the Argentine team has let itself out of the danger of elimination. It has now qualified for the knockout stage. Qualifying for the fourth consecutive time in the group stage of a World Cup, this win didn’t come easy for Messi’s team. After losing 0-3 to Croatia in their second match, Albiceleste were on the brink of elimination from the quadrennial event. They utilised their only chance against Nigeria to come out of the danger and secure their position in the last 16. Argentina, one of the most loved teams in the world, have a huge fan following. Millions of fans, who were upset over their dismal show in the first two fixtures, are now content to see them ascending at the most watched sporting event on the planet.