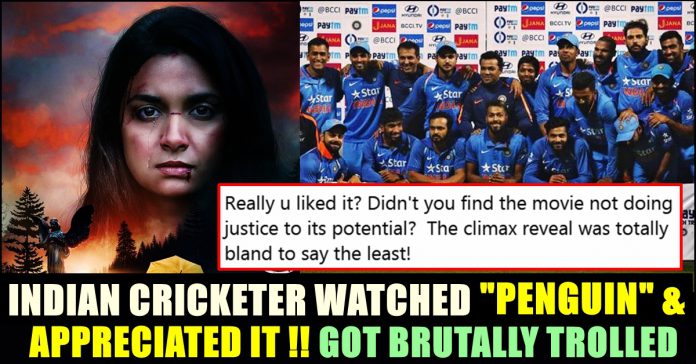 Ravichandran Ashwin, a bowling all rounder from West mambalam, Tamil nadu who plays for team India, is an ardent follower of Tamil cinema. He who recently interviewed actors Madhavan, RJ Balaji through his youtube channel to kill his quarantine boredom, watched “Penguin” and expressed his opinion in his official twitter account.

Keerthy Suresh’s “Penguin” produced by Karthik Subbaraj’s Stone bench productions released on Amazon Prime on 19th June with massive expectation. The film which was directed by debutant Eashwar Karthik, has depicted the struggles faced by a Mother who is in search of her missing son.

Touted to be a horror thriller, the film became the second mainstream Tamil film to get a direct online release after Ponmagal Vanthaal. Music composed by Santhosh Narayanan, the film was produced by Stone Bench productions and Passion studios.

The teaser of the film suggested an emotional mother’s struggle to rescue her son from a serial killer who is called as “Umbrella man”. Reports said that Keerthy accepted to do the role after after hearing two lines of the story as she got moved by the core plot. As soon as releasing, the film received many kind of receptions from the audience of Tamil cinema.

Now, Ashwin, after watching the film, posted a tweet saying that he has been hearing good reviews about the film. He appreciated Keerthy Suresh for portraying the role of a mother with ease. “Been hearing good reviews about #Penguinonprime so We watched it last night. Keerthy Suresh has slipped into her character with so much ease along with the suspense that got all of us hooked on. The BGM was good. It’s on Amazon prime” the cricketer’s tweet read.

Been hearing good reviews about #Penguinonprime so We watched it last night. @KeerthyOfficial has slipped into her character with so much ease along with the suspense that got all of us hooked on. The BGM was 👏👏 It’s on @primevideoin
@karthiksubbaraj @EashvarKarthic pic.twitter.com/m64gARwf6S

This tweet from the cricketer didn’t go well with the majority number of his followers as many people found “Penguin” as a flawed one. One of his follower asked Ashwin to be true to his conscience whereas another one said that what cricketer heard might be a rumour.

Worst movie, please don't talk about this film again if not i will delete my account😢. All are lying

One of the worst ever movie I have watched. I m sure you also felt the same but you just want to promote this movie.

Ashwin being a movie lover himself promoting #PenguinOnPrime shows the power of pr agencies.@SriniMaama16

Have you watched the film ?? Comment your views below !!