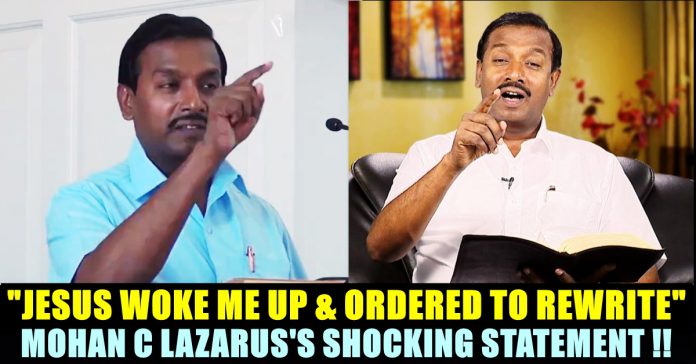 A video of Evangelist Mohan C Lazarus of Thoothukudi-based Jesus Redeems Ministries narrating about a high profile judge’s way of writing judgement for every case, surfaced in Internet only to shock the users of it. The video which was shared by SG Suryah of BJP party, shows Mohan C Lazarus explaining that the judge is writing every judgment only based on Lord Jesus’s direction.

In the video shared by S.G Suryah, we can see Mohan C Lazarus revealing a conversation he had with the unidentified judge. “She/He was a judge in Tamil nadu and retired very recently. She made her preaches in our church and gatherings. She/He is very devotional to the mighty lord. While talking with her, once I asked how she/he writes her/his judgements after hearing about a case. I asked her how she/he finds the right culprit in her/his judgments” Mohan says.

“You are asking me a very minute question Brother” said the judge to Mohan C Lazarus according to him. “I don’t know about others. Generally other judges will think of everything that happened since the start of the case. They would recollect the statements of witnesses and about the evidences but will be left confused at the end. But after getting the blessings of the mighty lord and after being anointed by the holy spirit of him, while writing the judgment, I will wait in the community of Lord. I will keep the entire case report on his foot and would pray to him to direct me to write my judgement saying that he is the superior of all who knows about the guilty and innocent more than me” the judge said according to Mohan C Lazarus.

“He will communicate with me clearly. The holy spirit will come down and would guide me. He will point out the real culprit, would help me get a clear picture about the incident and would help me write correct judgements. I will write judgments only with the guidance of my Lord. I will be happy while doing that.” she/he said. Mohan further states that Jesus once woke the justice up during her/his mid sleep and made her/him rewrite one of her/his judgement regarding a case. “That’s how deeply he is guiding me in writing judgments” the justice said according to Mohan.

Sharing the video, SG Surya, youth leader of BJP party, wrote “A Judge according evangelist Mohan Lazarus wrote all judgements by submitting briefs to ‘Jesus’. Once after he/she slept writing an order Jesus appeared in dreams, asked to rewrite order by pinpointing guilty. Shameful conduct. Who? Needs investigation.” in his tweet.

A Judge according evangelist Mohan Lazarus wrote all judgements by submitting briefs to 'Jesus'. Once after he/she slept writing an order Jesus appeared in dreams, asked to rewrite order by pinpointing guilty. Shameful conduct. Who? Needs investigation.pic.twitter.com/AfuB82VNwl

One of a twitter user named as Vishwatma said that the justice is R. Banumathi. R. Banumathi, a Judge in Supreme court is officially retiring on 19th of July but her last working day was on Friday. She is known for writing maximum judgements during her stint of six years at the top court. She belongs to a group of rare Justices elevated to the Supreme court from the lower judicial services. Reports suggests that she has authored 386 judgements which is the maximum when compared to other sitting judges.

Justice Banumathi: During my judicial service, there were mountains of obstacles for no reason. Yet no human hand could prevent what Jesus Christ has ordained for me in my life.
How can we expect justice from such people???#Lazarus pic.twitter.com/C5HDcyr9dd

In his earlier tweet, SG Suryah mentioned the name of the judge but deleted it later and uploaded the above tweet without mentioning the name.