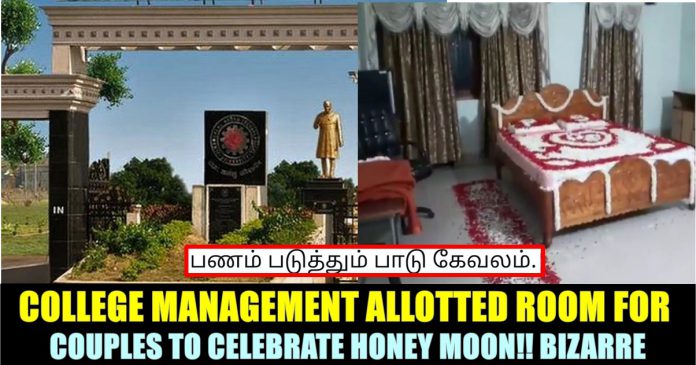 The honeymoon room was been booked for a newly married couple at the guest house of The Jawaharlal Nehru Technological University (JNTU), at Kakinada in Andhra Pradesh.

A report that recently got surfaced on the internet said that the first night of a newlywed couple took place at a guest house of a college university and the incident left the Andhra educationists in a shocking state.

According to The Jawaharlal Nehru Technological University (JNTU), Kakinada Registrar Professor R. Srinivasa Rao, Women Empowerment Cell (JNTU-K) Director A. Swarna Kumari had obtained permission for the two days (August 18 and 19) accommodation in the guest house of the college university. However, a couple had reportedly celebrated their honeymoon in the same rooms allotted to Ms Swarna Kumari for two days.

As all the educational institutions are still closed due to Covid-19, the newlywed couples tired to celebrate their honeymoon there. The first-night room tour video was taken and initially, it was forwarded to the friends and family by the couple. Later the video was spread on social media platforms on Saturday.

Professor Srinivasa Rao has stated that he had inspected the guesthouse on Saturday and inquired with the guesthouse staff about this unauthorised occasion. A five-member committee has been authorised to inquire about this incident at the college university. The students’ council of The Jawaharlal Nehru Technological University has also opposed this incident.

The news blew out in no time with reactions trolling the college management. Sweet Sugumar, a Twitter user replied, “They had misunderstood the popular Tamil saying, “Which would compare a good family with a university”

Another funny reply by Bayam Ariyaa Parambarai goes this way, “What is there to be surprised in this? Doesn’t the college need students in future to get educated there? Let the college allow such occasions so that the population increases. And this would make the college get their seats full.”

Naresh Kumar S commented on the tweet, “What is wrong in this? It is only a guess house.” He is expressing his views as nothing to be worried about it because it is just a guest house.

Jabo B commented, “Ugh! Maybe a cash-starved University! Wonder who the VC is!” He is stating the idea to welcomed to earn money in a new way.

Ugh! May be a cash starved University!😍😅 Wonder who the VC is!

C. Ilayaraja said something wisely as, “Good business. Money plays the main role.” At the end of the day, it is all about the money that makes people plan such things.

The five members committee was asked to submit the report within two days. The report will be filed under the Andhra Pradesh State Council of Higher Education (APSCHE). The enquiry is been made about how the guest house of the University has been rented for non-academic purposes.

However, it may be, this is a rubbish thing to be allowed in colleges or universities or any other educational institutions. The guest house of a college is meant to be used by the college authorities only for official purposes by the college. It is not advisable to be used by common people.