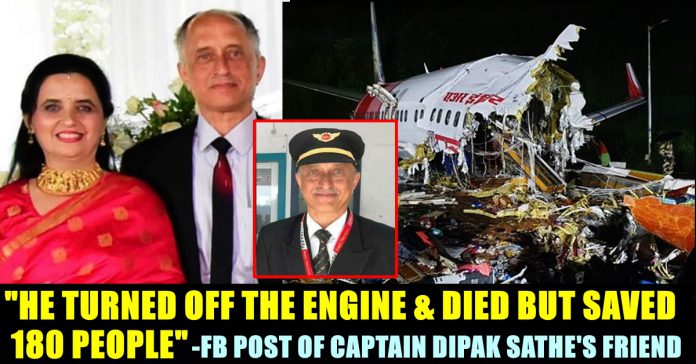 Captain Deepak Vasanth Sathe is one among the 18 people who died after an Air India Express flight from Dubai crashlanded at Kozhikode airport on Friday. A facebook post of his friend and cousin Nilesh Sathe left many people teary eyed as it contained the details on how Dipak Sathe sacrificed his life to save the lives of 180 people in the plane.

60 year old Sathe was the former Wing commander of the Indian Air force and served with its flight testing wing before taking to commercial flying. He was an alumnus of the 58th course of the National Defence Academy in Pune, and was awarded the “Sword of Honour” at the Air force academy in Dundigal.

The veteran learnt flying the Soviet origin MiG-21, during his 22 year career Indian air force. Being a skilled pilot, Sathe trained many youngsters according to report.

Now, a facebook post of his friend and cousin Nilesh Sathe, narrated the details of his last minutes. He expressed his grief on his dear friend’s demise, said that the landing gear didn’t work.

“Ex IAF pilot made three rounds of airport to empty the fuel which saved plane from catching fire. That’s why there was no smoke seen coming from the crashed aircraft.
He turned off the engine right before the crash.
He belly landed after the 3rd iteration.
The right wing was ruptured.
The Pilot martyred but saved life of 180 co-passengers.”

Facebook post of Nilesh read who also revealed about the last conversation of himself with Dipak. “He called me just a week before and was jovial, as always. When I asked him about the ‘Vande Bharat’ Mission, he was proud of bringing back our countrymen from Arab countries. I asked him,”Dipak, do you carry empty Aircraft since those countries are not allowing entry of passengers?” He had replied,” Oh, No. We carry fruits, vegetables,medicines etc to these countries and never the aircraft flies to these countries empty.” That was my last conversation with him.”

While writing about an earlier accident of Dipak, Nilesh wrote “He survived in air crash in early nineties when he was in Airforce. He was hospitalised for 6 months for multiple skull injuries and nobody thought that he will fly again. But his strong will power and love for flying made him clear the test again. It was a miracle.”

Dipak survived by his wife and two sons. “both pass outs of IIT Mumbai. He is a son of Colonel Vasant Sathe who stays in Nagpur along with his wife. His brother, Capt Vikas, was also an Army man who laid his life while serving in Jammu region.” Nilesh said in his post who added a poem on soldier sacrificing his life for his countrymen.

Here’s the poem shared by Nilesh in his post :

Put my medals on my chest,
Tell my Mom I did the best

Tell my Dad not to bow,
He won’t get tension from me now,

Tell my brother to study perfectly,
Keys of my bike will be his permanently

Tell my Sis not to be upset,
Her Bro will not rise after this sunset

And tell my love not to cry,
“Because I am a soldier Born to Die….”

At least 18 people including 2 pilots died in after the flight skidded. However, the four cabin crew members are afe, said Air India Express in a statement. 137 people who got injured are admitted to hospitals in Malappuram and Kozhikode, according to state government officials.