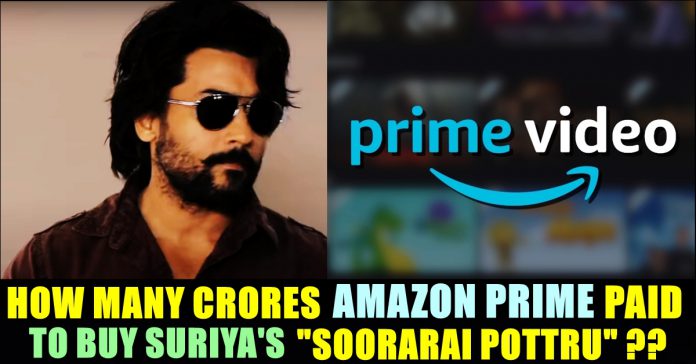 On the auspicious day of Vinayagar Chathurthi, Actor Suriya came up with a biggest announcement in Tamil cinema history. The actor who earlier released his “Ponmagal Vanthaal” in OTT and became the first ever producer to make the brave move, has made it public that his most awaited coming of age biographical drama “Soorarai Pottru” is going to stream in Amazon Prime from 30th of October. As soon as he made the announcement, mixed reactions are pouring from all the directions of Internet.

Tamil nadu theatre association head Tirupur Subramaniam has condemned actor Suriya by saying that he is kicking the ladder by using which he climbed the height he is today. Announcing about it in his official twitter account, actor Suriya who also produced the movie, stated that the COVID 19 pandemic is the main reason behind his decision. The actor also pledged that he will complete acting in at least two films before the pandemic ends and will make people happy by releasing them in theatre. He also announced that he will be donating Rs.5 Crore to the people who are fighting against COVID 19 from the money he got for releasing “Soorarai Pottru” in “Amazon Prime”.

The film which is believed to be a biographical picture of Air Deccan founder G.R Gopinath, is touted to be a coming of age biographical drama. Directed by Sudha Kongara, the film has G.V Prakash as musician. It is notable that Gopinath is a retired Captain of the Indian Army, an author, and also a politician. As Suriya gave his word to provide Rs. 5 crore to the public people, people working in film industry and to the frontline workers, people wondered how much he could have got from Amazon for selling the movie.

According to the movie journalists of Valaipechu youtube channel, Amazon Prime has paid Rs.60 crores to the producers of “Soorarai Pottru” to stream the film in their platform. Bismi, one of the journalists said that the money to make the film was invested by Sikhaya Entertainment and Suriya became the producer of the film by not receiving his salary. He said that the main reason behind Suriya’s decision is the huge offer proposed by the online streaming platform.

Bismi further said that Amazon initially locked the film’s digital rights for Rs.20 crores. Now, as it skipped the theatrical release, the OTT platform offered Rs.60 crores for the premiere. As the film was made of a budget Rs.60 crores, the satellite rights of the film was already bought by Vijay TV for Rs.20 crore. With the sale of Hindi dubbing rights and overseas business, the film has made Rs. 99 crores so far, according to the channel.

Amazon Prime is also trying their best to buy “Master” and “Jagame Thanthiram” to premiere in their platform, sources revealed. Read : “I am Facing 40 Lakhs Of Loss Per Month” – Theatre Association Head Slammed Suriya !!