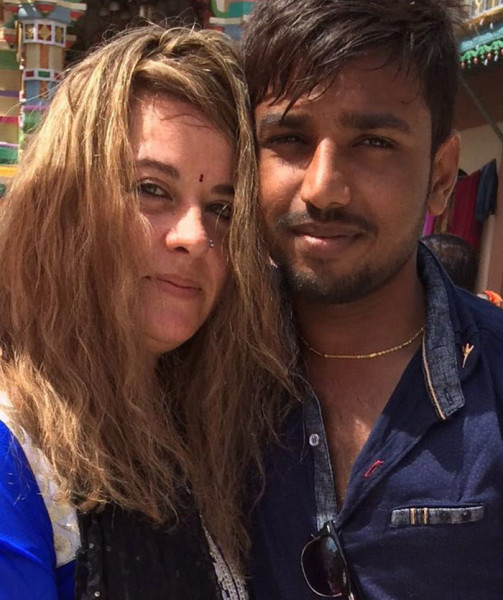 There is no denying the fact that this is the era when people change their lovers like they change clothes and at such an age, love story of Emily and Hitesh Chavda proves that true love still prevails.
Emily (41) is a health coordinator in Montana, America while Hitesh (23) is from India and lives in a slum in Ahmedabad. They both came to know each other through social networking website Facebook and after numerous chat sessions, Emily decided to visit India to meet her friend.

But the most interesting thing about their story is that they both don’t knew each other’s language, so while chatting Google Translator was of great help for both of them.
The couple got married the very day they met each other face to face in India.

Hitesh shares his story, “Neither of us knew each other’s language so I would copy and paste her messages using Google Hindi translation to understand what she was trying to say. I would then compose my own message in Hindi, translate into English and then send it to her.”
They married as per the Hindu traditions and customs but in the beginning. Parents of Hitesh were not agreed for marrying their son to Emily but as they witnessed devotion and love of Hitesh and Emily for each other, they gave their acceptance.

Hitesh tells that his parents loved Emily’s simplicity, “When we met in person for the first time, I fell in love with her simplicity and innocence. She was so much in love with me that she even decided to learn Indian cooking.”
Emily told this about Hitesh, “I liked his innocence and simplicity. He never tries to hide anything from me. This is why I decided to marry him.”

Emily was very excited getting dressed up in traditional Indian Bridal dress.
The couple has decided to visit USA for their honeymoon after which they will get settled in India.
We wish the couple a bright future filled with lots of happiness!!
Source
Image Source