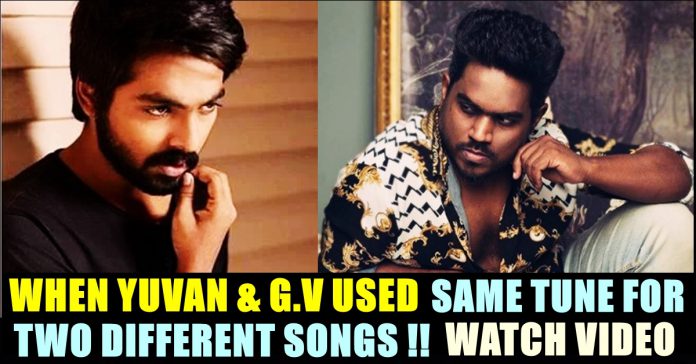 Yuvan shankar raja is one of the most influential music composer of Kollywood film industry who is popularly known as “Youth icon” among his fans and followers. Having composed 100+ films so far, Yuvan’s collaboration with directors Vishnu vardan, Selvaraghavan, Ram, Venkat Prabhu has a separate fanbase among Kollywood fans. Unlike other musicians, Yuvan himself admitted that he plagiarised tunes from his father Ilayaraja in several stages.

Now, an interesting fact about himself and music composer G.V Prakash composing same tune for two different songs has been surfaced. Strange thing about the fact is, both the songs are chartbusters and are acting as favourites for many till today.

In an interaction that took place in the year 2018, Yuvan Shankar Raja admitted that the song he composed for the film “Sarvam” which starts like “Addada Va Asathalam” and G.V Prakash’s “Un Mela Aasa Thaan” from the film “Aayirathil Oruvan” contains same tune because he composed it.

Abhishek Raaja who interviewed Yuvan Shankar Raja at that time asked it as a doubt to the man himself. Answering to the question, Yuvan said that he was supposed to compose music for “Aayirathil Oruvan”. “Actually it was a tune composed for “Aayirathil Oruvan”. But I didn’t do the project. So I gave that tune to Vishnu Varthan not to waste it. He shot it for “Sarvam”. Later on Selva called me and asked whether I didn’t know he was going to use it. I said I gave it to Vishnu” said Yuvan in the interaction.

“To match the visuals he shot for “Aayirathil Oruvan”, Selva did another tune similar to it” he revealed.

Music director G.V Prakash kumar, in an interaction said that he composed for that song on seeing the visuals shot by the film crew.

Sarvam starring Arya and Trisha released in the year 2009 during May whereas Aayirathil Oruvan was released on the Pongal of 2010. However, both the songs are ruling the playlists of youngsters till today.

On the work front, Yuvan Shankar Raja is committed to a dozen number of films along with Ajith kumar’s “Valimai”. G.V Prakash has composed music for “Soorarai Pottru” only to impress the audience in big time. His acting ventures such as Jail and other films are also expected to release post lockdown.

Comment your views on the way these two music directors approached the tune for their songs !!