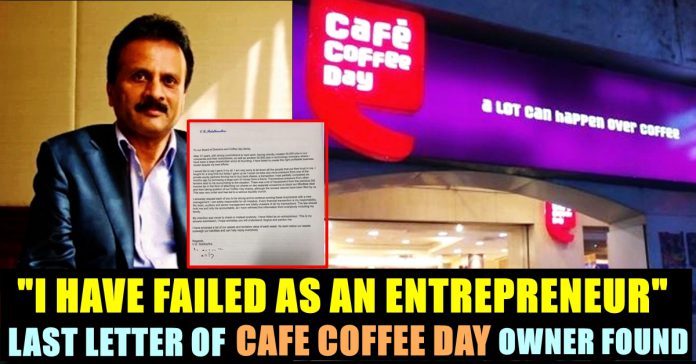 VG Siddhartha, the founder of India’s largest Coffee chain Cafe Coffee Day who also owns Asia’s single-largest coffee estate, is missing since Monday evening. In a letter reportedly written by Siddhartha to the board of directors and his CCD family before he went missing, he said he had “failed to create the right profitable business model despite my best efforts”. He added, “I would like to say I gave it my all. I am very sorry to let down all the people that put their trust in me.”

VG Siddhartha went missing on Monday night from a river bridge in Mangaluru and a note purportedly left behind by him had an apology to his employees for “failing” to build a “profitable business model”. The 58-year-old businessman, who was travelling on the highway to Mangaluru , asked his driver to stop the car as they were crossing the Ullal bridge across the river Nethravathi, and told him to wait at the end of the 1 km long bridge. When he did not return even after some time, driver tried reaching Siddhartha on his mobile, which had by then been switched off.

Police in Mangaluru told reporters that going by the circumstances of his disappearance they suspect he might have taken the extreme step, news agencies reported. In the letter, he apologized for “failing to create the right profitable business model“. He wrote, “I am very sorry to let down all the people that put their trust in me. I fought for a long time but today I gave up as I could not take any more pressure from one of the private equity partners forcing me to buy back shares.” He further added, “I sincerely request each of you to be strong and to continue running these businesses with new management.” The Coffee King took all the responsibility for his failure and wrote, “Every financial transaction is my responsibility. My team, auditors, and senior management are totally unaware of my transactions. The law should hold me and only me accountable as I have withheld this information from everybody including my family.” Siddhartha opened his first CCD outlet in August 1996 in Bengaluru’s most-visited shopping street, Brigade Road. The chain has grown to 1750 stores across India along with 60,000 vending machines, besides presence in Vienna, the Czech Republic, Malaysia, Nepal and Egypt.

He married the daughter of former Karnataka Chief Minister SM Krishna’s daughter, and they have two children.