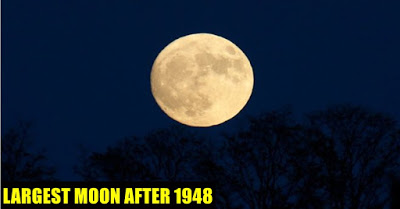 After almost 69 years observers will be able to see the moon at a distance closer than normal one that is a supposedly rare feat happening.

The phenomenon that happens with Earth’s natural satellite- The Moon coming closer to the Earth’s orbit which’d make the moon look the largest in appearance is called as Super Moon or perigee-syzygy of the Earth-Moon-Sun system. The Moon orbits the Earth in an elliptical orbit and so the distance varies; at some points the moon is closer to the Earth and other times far away. The average distance between Earth and Moon is 384,500 km, but varies between 363,396 km and 405,504 km throughout the year.  At the time of a Super Moon, the full moon comes closes to the Earth.

It is a rare happening this year with all the full moons of October, November and December happen with the moon coming closest to Earth. A total of six Super Moon occurings happened in 2016 with this one being the largest for more than half a century. To observers, it will appear about 7% larger than normal and about 15% brighter – although the human eye is barely able to discern that difference. This moon would not only be the closest and brightest moon of 2016 but also the largest moon till 1948. The next happening won’t happen until 25 November 2034.