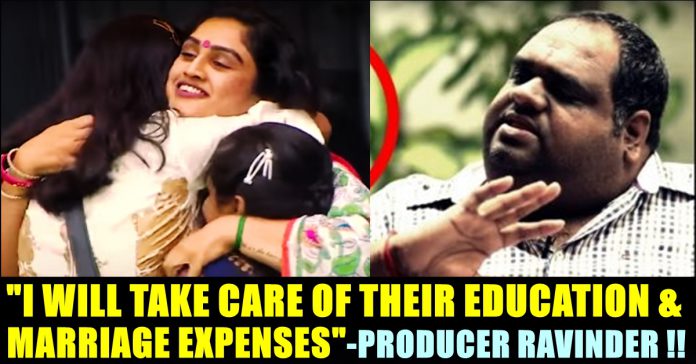 The verbal spat between Ravinder Chandrasekhar who owns Libra Productions and Vanitha Vijayakumar continues to take place in the Internet platform. Initially Ravinder called out Vanitha for ruining a family of a woman and two children. In a way of countering his accusations, Vanitha Vijayakumar called him personally and said that she wants to talk with him. Ravinder who refused to talk to her as it was Sunday, gave an interview to media the next day. He played the audio recordings of Vanitha Vijayakumar and answered to her every sentence.

Now, he came up with an another set of audio recordings and answered to them one by one. Along with public, several celebrities including Lakshmi Ramakrishnan, Kutty Padmini reacted to the marriage issue of actress and former Bigg Boss contestant Vanitha Vijayakumar. However, they deleted their comments after Vanitha replied to them in a furious way. Days ago, movie producer Ravindran Chandrasekar has expressed his disagreement over the marriage of Vanitha Vijayakumar and said that she broke the law by marrying Peter Paul who is still a husband of Elizabeth Helen, his first wife.

In this recent interaction with media, Ravinder has said that he is ready to bear the expenses of the education and marriage of Vanitha’s both the daughters if she is ready to leave Peter Paul with his family. Answering to Vanitha’s audio note, in which she asked if he could spend Rs.40,000 at least for her if he really cares, Ravinder said that he still cares for Vanitha and treats her like his elder sister.

“I don’t know what movies he made as a producer. I have watched him talking about Kavin. You are talking about him in public because you made a film for him by spending Rs.4 crores. Who are you to talk about me ? I want Rs.40,000 now, could he provide me ?? No one will stand by you when there is a problem. If he is caring for that family so much, ask him to look after them financially” Vanitha said.

“Peter Paul should look after his family. I will take care of my sister’s (Vanitha) family. Not just 40,000, I will bear the whole expenses of both of your daughter’s education and marriage.” Ravinder said in the interview and added that he will continue voice out against injustice.

“If you are serious about the 40,000 matter, I am ready to give. But what more important is, I will come sit with my mother in front of you and will take the financial responsibility of education and marriage of your daughters. I am saying saying this for the sake of media stunt. I made 6 films and lost 20 crores. If that is the problem of your life, I will do it with my whole heart. You have asked for Rs.40,000. Better you send your account number now. And also post the screenshot to public and make them believe that I am walking my talk” Ravinder said.

Ravinder also said that he is ready if she is still intended to file police complaint. “Remember that some of your friends gave me some proofs against you to produce in police, so let us go together to police. We will play Ludo in Jail” the film producer said.