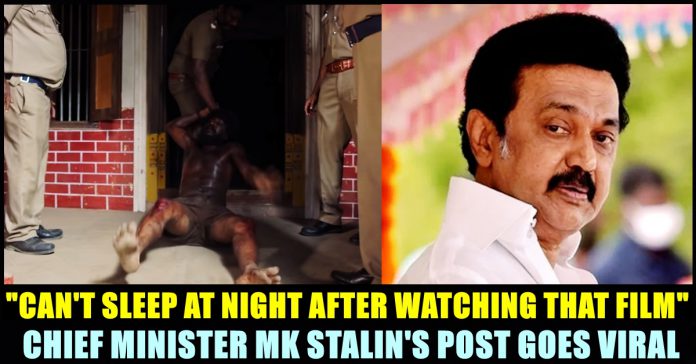 After watching it at a special screening, Chief minister MK Stalin released a public note lauding Suriya’s “Jai Bhim” which is going to release in Amazon Prime on 2nd November. In the note, the DMK leader said that the film made huge impact in him and thanked Suriya for being the main cause to make the film. Replying to the press release, actor Suriya uploaded a tweet through his official twitter handle, expressing his gratitude.

Watch the trailer of “Jai Bhim” below :

Jai Bhim which features Suriya in the lead role is directed by TS Gnanavel. The film is written by Manikandan, who will be acting in the film as well. Produced under Suriya’s own production banner 2D Entertainment, the film happens to be the fourth venture the production house and Suriya are collaborating on a project.

The gripping trailer of “Jai bhim” promised an engaging court room drama with Suriya playing the lawyer who fights for three men who belong to tribal community. Dialogues that were uttered by Suriya were powerful and the shots convinced audience that the film will definitely get acclaimed critically.

Suriya said that “Jai Bhim” is an important film for the entire world. Mentioning that the film takes place in the year 1995, Suriya believes that the film will ignite young minds. The actor says that the film is about what happens if one person raises his voice for the voiceless and stays true to his opinions and brings change in the society. Now, chief minister MK Stalin who watched the film through a special screening, lauded the film crew pulling out such a project and expressed his wish on many more similar Tamil films releasing.

“Watched “Jai Bhim” yesterday and the memories of it made me emotional last night” MK Stalin said while addressing the film crew in his press note. “You people have proved that there is no better way to film and portray the struggles faced by “Irular” community people. Though it is a film that is made based on a particular incident, the impact it made among the audience is powerful” Stalin said through his post.

Stalin further mentioned about how the film portrayed on how a deed of a single police man ruins the reputation of police department and how policemen are also being the cause to bring the truth to the light. “You showed how law and justice could wash away any kind of misery. The film showed how a lawyer and police man could establish justice” Stalin said and appreciated the acting skills of actor Suriya. “Suriya deserves appreciation for choosing, acting and producing a product like this” he added.

Chief minister MK Stalin wanted many more similar films to release in Tamil cinema and appreciated directed Gnana vel and crew. “Apart from making a film based on “Irular” community, the way Suriya donated Rs. 1 crore for the well being of “Irular” community people made me admire him. Many should get inspired from him” MK Stalin said and opened about how the film connected to him personally. Stalin ended the press note wishing “Jai Bhim” film crew and thanking Suriya.