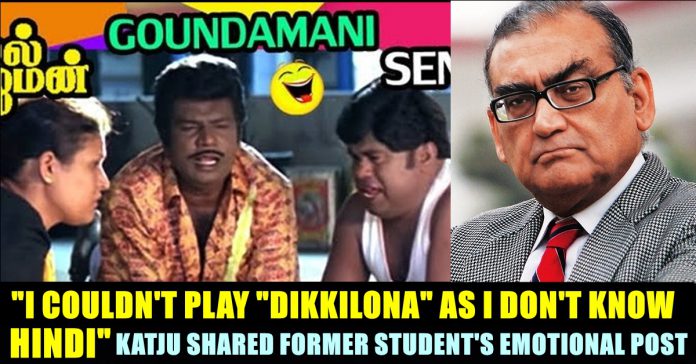 Markandey Katju, former Supreme court judge and currently chairman of the Indian Reunification Association, wants Tamil nadu people to learn Hindi. He has been sharing the write-ups that are being sent to him in the inbox of social media platforms to make people understand the importance of language Hindi.

With the ruling AIADMK rejected the three-language formula outright and reiterating two language policy, the state thwarted a perceived third attempt for imposition of Hindi in the last 83 years. In the 1937, the first attempt of Hindi imposition was prevented through a series of protest by Dravidar Kazhagam and a few other organisations in the Madras Presidency. In 1967, massive agitations led by DMK spoiled the second attempt. Now, Chief minister Edappadi K Pazhaniswamy did the same by rejecting the policy. People of the state are also constantly raising voice against Hindi imposition in the state.

Markandey Katju who is pretty much active in social media platforms, said “While I am totally opposed to imposition of Hindi on anyone, I advise Tamilians and other Indians to voluntarily learn Hindi as that is in their own interest. Whether they follow this advice or not is their own choice” through one of his post.

To prove that the stand he took is appropriate for that Tamil society, he has been sharing the write-ups of people from Tamil nadu, believing that they are expressing their wish of learning Hindi. One of a recent post he shared, garnered wide attention due to the content it contained. The alleged social media user user named as Prabhu, sent him a message saying that he couldn’t play Dikkilona and Jil Jung Juk with his Hindi friends in IIT due to the lack of language knowledge.

The parody message was shared by Markendy only to receive enormous number of “Haha” reactions. Screenshot of the same post is trending in other social media platforms as well.

“This is Prabhu from TN. I studied my UG in IIT Kharagpur. All though majority were Bengalis , the language widely spoken was Hindi only. I was not able to learn Hindi during my childhood because of Dravidian politics , but later came to know that their family alone learned Hindi and other languages while not letting people of TN to learn anything else other than Tamil.

During my time at the IIT , me and my friend really struggled to get along to with other students. They used to play lot of interactive games like Jil Jung Juk and Dikkilona. But we couldn’t understand and enjoy the moments with them , Because we didn’t know Hindi.😓 We faced lot of struggles during Group discussion and Viva classes. I really wish people in TN understand the importance of Hindi and start learning it.

Also lot of girls were interested in talking with me and my friend , but we couldn’t connect because of the language barrier. We had the chance to mingle and develop the inter culture between the states , but we couldn’t. After seeing all your posts and messages from fellow Tamil people , now I realize what I have missed. I really wish people soon realize it and start learning Hindi. Jai Hind sir. Please post this in ur wall , I want people from TN to know that we Tamilians are ready to learn Hindi. Indian before Tamilian.” the post read.

As we all are aware, the terms “Dikkilona” and “Jil Jung Juk” were invented in the films “Gentleman” and “Kadhalan” respectively. In the films which were made by director Shankar, these terms were used in comedy scenes by the comedy actors Goundamani, Senthil and Vadivelu. Not knowing about the original context, Markandey katju who belongs to a Kashmiri bandit family, shared it right away without consulting anyone.

Few more posts shared by the jurist are written in a same way and social media is not sparing him for the blunder he committed. Check out some of the reactions for his post :