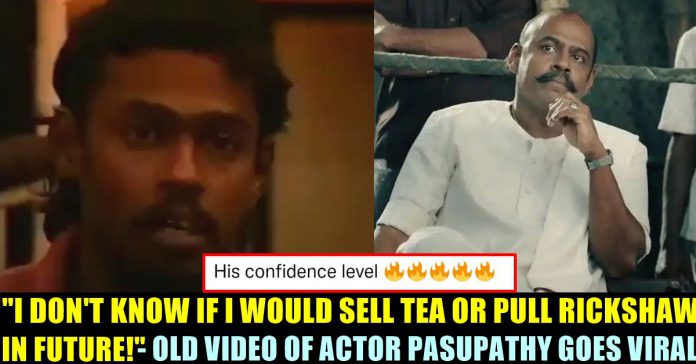 A video of actor Pasupathi has been posted on Twitter. The video is of Actor Pasupathy talking before becoming an actor. In the video, his speech exposes his confidence that he will taste the essence of success.

Known for her role as Vaathiyar from his recent movie Sarpatta Parambarai, Actor Pasupathy’s old video is a must-watch for all the aspiring actors. Pasupathy started his career as a theatre artist. Initially, he joined the ‘Koothu-P-Pattarai’. Later Pasupathy was asked by Actor Nassar if he was interested in acting. Then he was introduced to Kamal Hassan and ended up getting the villain role in Kamal Hassan’s movie Marudha Nayagam. The movie did not take off, and yet it did not dim the light of the actor. He went on to act in movies like Mayan, Virumaandi, Dhool, Veyyil, Thirupaachi.

His roles in movies like Idharkku Thaane Aasai Pattai Bala Kumara, Asuran, and Sarpatta Parambarai gained him a huge fan base among the youngsters. He is still been called Vaathiyar, the role he played in his recent release Sarpatta Parambara.

Here is a video of Vaathiyar talking about theatre artists, when he was one among them. His speech shows his motivated he has been and how he was having a fire in him. In the video, he has said, “He (Theatre Artists), is in the field for 10 – 15 years but he is not earning like a commercial artist. He is feared of the future. I have the fear, 15 others like me have the fear. We are feared about what are we going to do. We don’t know if we are going to survive as theatre artists or choose some other jobs. But I have the confidence that I will achieve.”

Many people have tagged the actor, who recently joined Twitter, in the video. People have commented that this video is inspiring and that his confidence has taken him to the place he is today.

Karuppusamy Aarumugam has commented, “His confidence has only made him stand in front of all of us today.”

A true legend. Only one movie is enough “virumandi”vechu senjitya