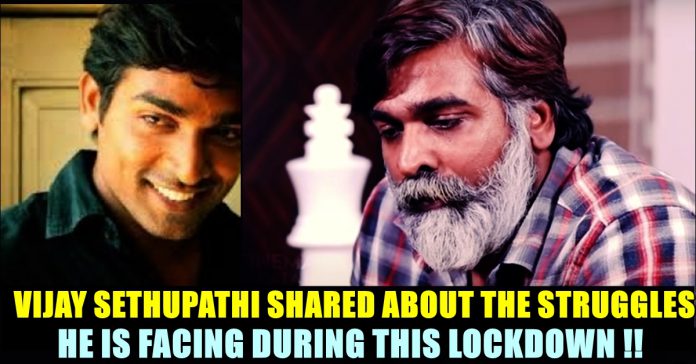 Vijay Sethupathi appeared in an interaction amidst lockdown and shared about many things while talking about his upcoming films. The man who is known for his sensible public statements, opened on many issues including the current lockdown crisis in this interaction. Vijay Sethupathi, one of the busiest actors of Kollywood industry, loved by majority number Tamil cinema fans for his natural way of delivering performances. Irrespective of his market and fan base, the actor is portraying various characters and concentrating in content oriented films. The actor who is very much known for his versatility, played role of a transgender in Super Deluxe, 70 year old theatre artist in Seethakadhi, Police officer in Chekka Chivantha Vaanam. He also played villain for Super star Rajinikanth in Petta movie which was directed by Karthick Subbaraj.

The actor who has handful of films in various stages of productions, said that he desperately wants to work now as he is very much depressed due to this lockdown crisis. “It feels horrible. I want to go to work immediately. Either body or mind, I don’t know what to secure amidst this crisis. Despite of all my attempts, the situation automatically takes me into the depression mode. I myself struggling a lot without job, people who belongs to middle class would have lot more struggles such as paying rents, school feels, interests and lot more.” he said.

“We have to go to job. I can’t see the city amidst this lockdown. When I was in middle class, I felt it hard to run my family between 20th and 30th even when I was receiving the salary. Now, I can’t imagine how they are facing when there is no salary” Sethu worried.

Vijay who shared about his upcoming film Thuglak Darbar and about his character in the film, said that the release of the film is based on the producer’s decision. While talking about the struggles faced by producers, Vijay said that he knows the pain of paying interest every month for the debts as he himself produced a number of films. “Release of the film solely depends on the producer. They are the one who has the rights to take the decision as they are paying interest every month. I have produced three films myself. So I know the pain of paying the interest. It will sit on your head everyday. Jana sir would beautifully say that the money we lend for interest will work of us even when we sleep. So the load will increase daily and producers should decide on the release” Vijay said.

While talking about changing something in his own life if he ever happened to get a golden ticket, Vijay said that he would make himself unborn. “I don’t really know the meaning of the life. Every time we are required to do something. There is no peace at all. So I would make myself unborn if ever get a chance to time travel” the actor added. He also talked about many other things in the interaction and expressed his admiration towards actor Kamal Haasan.