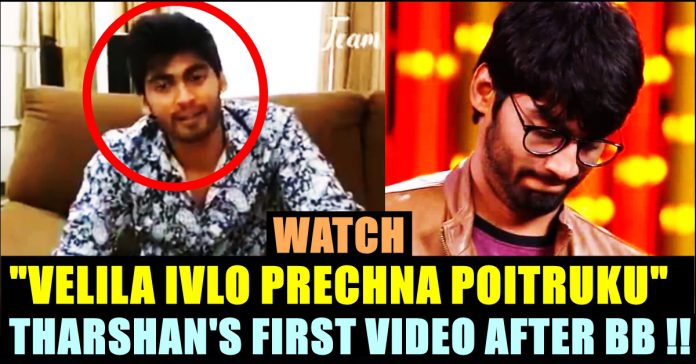 The elimination of Tharshan in Bigg Boss show made an impact in social media as everyone felt it is some sort of injustice to the voters of the show. One of the prominent contestant who was expected to win the title, announced as the evicted contestant by Kamal Haasan just before the finale week of the show which left the audience in utter shock.

They started trending hashtags in Twitter against the channel for evicting Tharshan. Now Tharshan who came out of the house, uploaded his first video in his official twitter account. In the video, Tharshan thanked his fans and followers for the love they are pouring all these days.

Tharshan started his video by apologizing to his followers for not uploading a video earlier. “After coming out of house, I came to know that there are lot of problems have took place. The main reason behind me uploading this video is only you, my fans. I don’t know by what name I should call you. The correct word would be “Family”. The love that I am receiving now is something that is beyond my dreams.” said Tharshan in the video.

Watch the video he posted here :

Hey friends,
Happy to be back with you all again. Sorry for the delay guys. This is my first message after coming out from BB3. Love you all ❤️❤️
P.S This is my only official account pic.twitter.com/ztLWEyFMSk

“Every other contestant had fans. But with pride I could say that I gained a family through my Bigg Boss stint. I don’t regret on not getting the title as I gained a fan base which no contestants gained. And more thing is, I request you to vote for the four finalists. I won’t influence you to vote for any one particular contestant as you all know very well whom to vote. I want you not to vote for the sake of sympathy, discover the hard worker and vote for him/ her. Will meet you every one of you personally soon.” he added.

Kamal Hasan gave Tharshan an unforgettable send off where he said that he got a fame of acting in 10 films. Confused Kamal Haasan even asked the clapping fans whether they voted Tharshan or not.

Tharshan has became a heartthrob among young girls for his charming looks and he attracted family audience for his brave behaviour inside the Bigg Boss house as well. He was lauded by Kamal Haasan in several occasions for his spirit in tasks. His friendship with Mugen also admired by many as they never brought their emotions inside the game unlike other contestants.

What do you think on the message provided by Tharshan ?? Comment your views below !!