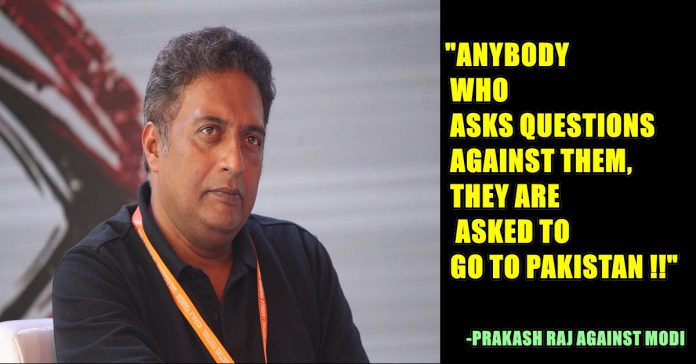 Actor Prakash Raj claims that Bollywood has stopped offering any role to him since he started criticising Prime Minister Narendra Modi and the Bharatiya Janata Party (BJP).

The National Award-winning actor told ThePrint that since October last year, when he first criticised the Prime Minister for his “chilling” silence on the murder of journalist-activist Gauri Lankesh, the Hindi film industry has sidelined him. Raj has launched a broadside against the top BJP leadership, and is now campaigning against the party in the Karnataka assembly elections.

Lankesh, who edited a Kannada weekly, was shot dead outside her house in Bengaluru by unidentified assailants in September last year. In March, a special investigation team (SIT) of the state police arrested a person allegedly linked with a radical Hindutva outfit in connection with her murder. Investigations are on.

“There is no problem (with the film industry) in the south, but there has been no offer from the Hindi film industry since I started speaking out,” Raj, a long-time friend of Lankesh, said. However, he says he’s not worried, because he has “enough” (money). “Gauri’s death disturbed me a lot… She was asking questions. When she was silenced, I felt guilty. Did we leave her alone in her fight? The more I question, the more attempts to silence me, be it (by) character assassination, threat or (by) trying to stop my work… it’s the BJP,” said the 53-year-old actor.

Raj questioned BJP president Amit Shah’s credentials as a leader, saying: “Why are we afraid of Amit Shah ji? What are his credentials as a leader? Have you (Shah) given one of the most pathbreaking, progressive ideas to the country? Have you brought the most scientific approach? His strength is he is a Chanakya. He can topple governments. He can win elections… Is this what I need?”

Raj said PM Modi had given hope to the country with his “talk” about creating 2 crore jobs, and eradicating black money, among others. “(But after) three and a half years, nothing has been done. They (BJP leaders) are talking about the past… ‘What did Nehru do? What did Tipu Sultan do? What did our Sanatan Dharma say?’ I cannot recognise my great grandfather two generations back, what do I do with Tipu Sultan?”

“You haven’t given an account of how much money is back. If I ask questions, I am anti-Hindu. If anybody speaks against them, they say we will send you to Pakistan. Arre… send us to some nice beach resort, to some nice holiday destination. Why Pakistan? Because it’s in your brain, your thought process that that religion (Islam) is wrong. Please learn from Pakistan, which made it (Islam) a single dharma (state religion); it is suffering from poverty. Do you want India to be like that?” he said.

Raj said he had given a thought to joining a political party or starting his own, but realised that in today’s scenario, people needed a voice speaking from non-political platforms.