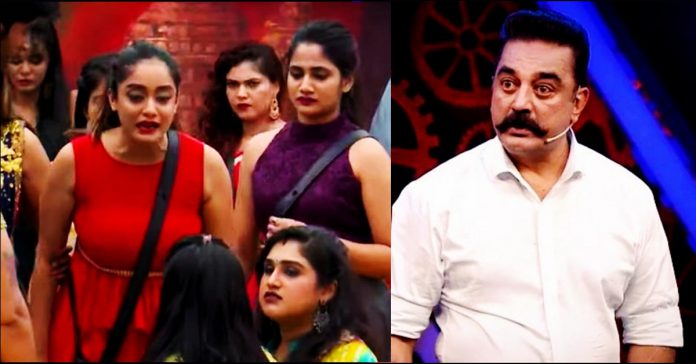 Meera Mithun, one of the controversial contestant of Bigg Boss Tamil show’s third season has conducted a press meet on November 2 to accuse Vijay Television and Bigg Boss management for not paying a single penny for her participation in the show. The contestant who spent 35 days inside the house denied to reveal the amount they owe to her by saying that it will affect her market value. She slammed the channel for not responding her calls and messages since the end of the show. She issued a severe warning to the Vijay TV for the payment issues she is facing.

“If I don’t get any response even after this press meet, I would go on to complain regarding this to higher authorities that will cause a ban for the Bigg Boss show” said Meera Mithun in her interview. If they are not going to pay me my money, I am planning to complain against Cheran in human rights commission regarding the issue that took place during her stint in the Bigg Boss show. “If my commitments are not going to get fulfilled then I have to file a 1 core defamation case against both Vijay Tv and Endemol company. Please pay 1 crore to me and I will finish it that way” said Meera Mithun.

Meera Mithun even stated that she is going to compete in politics in near future due to the injustice that is taking place in Tamilnadu against women. If you are aware of Bigg Boss show’s third season in Tamil, you must have known about Meera Mithun , one of the most controversial participant of the show. One of the highly controversial episode of the season is undoubtedly the one in which Meera Mithun accused Director Cheran of physical harassment. She said that he caught hold of her hip and behaved very rudely while performing a task. In the very weekend, She was treated with a “Kurumpadam” by Kamal Haasan who supported Cheran and said that he is not that sort of a person.

Followed by her Bigg Boss stint, the scenes of Meera Mithun from Sivakarthikeyan’s Namma Veetu Pillai were removed and she was removed from “Moodar Koodam” Naveen’s upcoming flick “Agni Siragugal”. Though the filmmaker made it clear that Akshara Haasan has replaced Shalini Pandey in the movie, Meera Mithun accused that the Akshara Haasan replaced for her role in the film with the influence of her father.

Then she went on the accuse almost every of her in the Bigg Boss show and even said that the “We are Boys” gang flirted with her. What do you think on this press meet of Meera ?? Comment your views !!