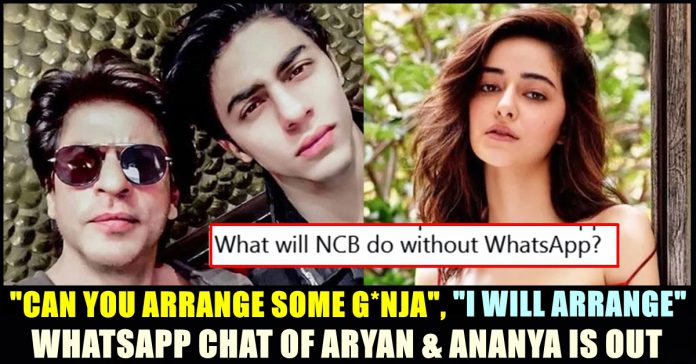 After his bail was rejected by a special NDPS court, Aryan Khan, son of Bollywood Super star Shah Rukh Khan continues to spend his time in jail. It has been reported that Aryan’s appeal against the order will be heard by the Bombay high court on 26th of October. He who is currently lodged in Arthur Road Jail has been ordered to stay in jail till 30th of October. Meanwhile, the chat details of himself and actress Ananya Pandey is making headlines across the country.

Narcotics control Bureau, on Sunday, visited Chunkey Panday’s house. Three NCB officials, including a female officer serves summon to Ananya Panday. The actress was asked to appear in NCB office on the same day 2PM for further questioning. Meanwhile, a search was made in Shah Rukh’s residence in Mannat. The search operation took place after the central agency submitted chat messages of Aryan Khan and Ananya to a Mumbai court and claimed that the both were discussing drugs. Ananya maintained a close bonding with Aryan and Suhana and the trio spent time together which is evident through the pictures that are available in Internet.

After recovering whatsapp chats from Aryan’s mobile, NCB started interrogating Ananya as they found her chatting with Aryan about drugs. Reports suggests that NCB showed Ananya her chats with Aryan and questioned about it. The chat reportedly showed Aryan asking Ananya if she could make some drug arrangements for him. Ananya replied to him writing “I will raise”, says reports.

However, there is no evidence could be found on the actress arranging the banned substance for Aryan Khan. When questioned, Ananya said that she was just joking with Aryan. The NCB claimed that the duo often discussed about drugs through their whatsapp messenger. Reports suggests that Ananya denied all the allegations that were made against her on using or procuring the illegal drugs. The actress was questioned for four hours on Thursday, says reports.

The actress has been invited for interrogation again and one of the NCB officers said that it doesn’t mean that a person who is being visited by the NCB is culprit. Various kind of reactions are surfacing in Internet as soon as the reports on the duo’s chat surfaced. Check out some of them below :

Karan Johar wanted to launch Aryan with Ananya Pande in 2022.

The international drug cartel comprises of Aryan Khan and Ananya Pandey.
One has to ask the NCB personnel what they’re smoking….

“Can you arrange for Ganja” asks Aryan. “Yes, I will raise the matter” says Ananya Panday. Just your average conversation between Bollywood’s so called “children.”

Was beginning to wonder why Narcotics Control Bureau hadn’t yet linked a Bollywood actor to Aryan Khan. Lo and behold, they have brought in that angle too. Actor Ananya Pandey is summoned to explain her whatApp chats with Aryan. What will NCB do without WhatsApp?

If a girl says in whatsapp ‘ I ll kill you ‘ which is generally we hear from girls in general talk … would it be a case of attempting to murder ? Or a case of threatening ?