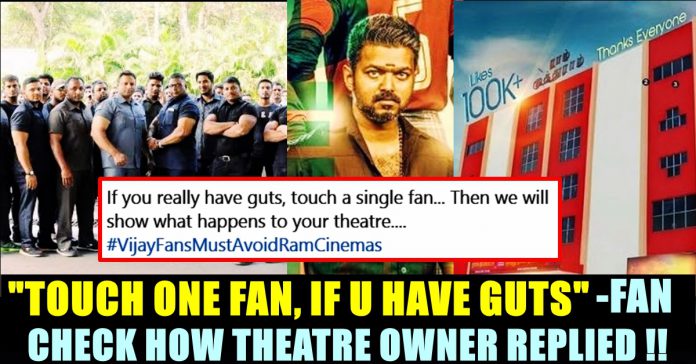 One of the most active twitter handle of a cinema hall is undoubtedly belongs to Ram cinemas which is located in Tirunelveli. Known for their unique way of marketing movies to visit their theatre, Ram cinemas is also known for their way of interacting with fans in social media.

Yesterday, the theatre made it to headlines through one of their reply to a fan who asked them to keep their screen safe during the first day first show of Bigil, Thalapathy Vijay’s most anticipated film of this year.

Ram cinemas posted picture of a bunch of bouncers and asked the fan to be safe on the release day as he disliked the particular fan’s way of approach. Check out the screenshot of their conversation below :

Now after that, one more fan came up with a threatening to Ram cinemas. He asked the owner to touch one single fan if he have guts after seeing the tweet he posted. “If you really have guts, touch a single fan… Then we will show what happens to your theatre…. #VijayFansMustAvoidRamCinemas” the fan wrote in his tweet.

If you really have guts, touch a single fan… Then we will show what happens to your theatre…. #VijayFansMustAvoidRamCinemas

Followed by this the theatre owner replied by saying that he love his audience. He also tried to make the fans understand that even a single crack in the screen will require to change the entire screen. He said that his reply is only for that particular person who tweeted with wrong mindset.

Someone is telling you that they gonna damage your property, what will be your reply?
We love our Audience, we give them full freedom to celebrate even we advice them to not use phone and celebrate.
We just enjoy the celebration with them, be it and star, cont.. https://t.co/lXmuqzHA1n

I’m receiving comments like safeguard your screens in these 3 weeks a lot. I’m afraid that this thing might become a trend. A silver screen cost much higher also it needs to be imported, even a single crack would cost to replace the whole screen. Cont

I actually like Thalapathy Fans a lot, till now no damage had happened cuz of them. Even here in social media they are supportive, so I’m not blaming the fans.
The particular person with that mindset.
Hope my replies clears all of your questions.
Thanks.

The bouncers reply of Ram cinemas went viral across the internet and the internet users had a good laugh on seeing it. Bigil, one of the most anticipated film of the year, is expected to release on Festival day of Diwali. The audio launch which took place recently added fuel to the anticipation of fans. Vijay, the lead of the movie is the only reason for all these noise which we all know. The film is based on women’s football and is touted to speak highly of women and freedom.

What do you think on this clarification of ram cinemas ?? Comment your views below !!