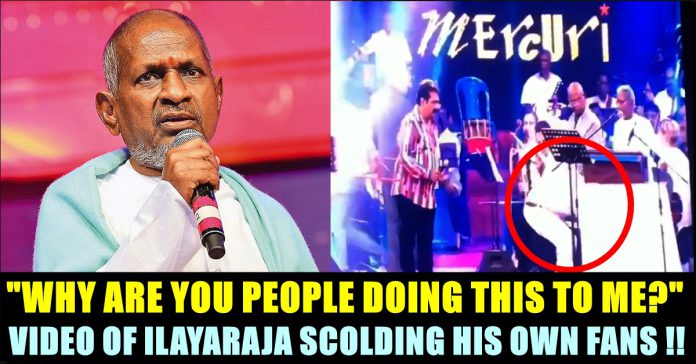 The Music Maestro Ilayaraja organised a concert on June 2nd, in association with Mercuri. The concert titled ‘Isai celebrates Isai’ had some of the most celebrated singers crooning their voices, while Isaignani explained the process and nuances behind his critically acclaimed songs and soundtracks.

The event is also said to be a tribute to the Cine Musicians Association and their family members. The concert took place on the legendary music director’s 76th birthday. The ticket prices started from Rs.500 to Rs.10,000. Ilayaraja is equally known for his controversial statements in public events as he is known for his music. Recently he caught in controversy for calling team “96” as impotent for using his songs in their movie.

Now in the yesterday’s event, the musician got extremely angry on a trespasser who tried to give water to someone who asked while the event’s performance was taking place. According to the fans who watched the event live, the musician asked a man to come on stage who hesitantly went near Ilayaraja.

When Ilayaraja asked why he is roaming on stage while the singer and musicians are performing, the man on stage whose voice is not so audible said that he tried to get some water for someone who was thirsty. After saying it, without a second thought he asked apology to Ilayaraja by touching his feet and left the stage. The video is now going viral in social media with various kind of reactions.

Then Ilayaraja directly questioned his audience about why they are occupying 10,000 Rs. seats when they have bought only 500 Rs. ticket. “Those who are not sitting in the place they paid for will scold only me. He is saying that he breached on to the stage due to thirst. We have done so many events with the thirst. I am standing here for 5 long hours. Can any one of you stand that much long ?? How come you people are willing to do these kind of interruptions ?? You people are doing a living out of my songs, ain’t you ??” the musician questioned to his audience.

Widely regarded as one of the greatest Indian music composers, llayaraja is credited for introducing western musical sensibilities in the Indian musical mainstream. Reputed to be the world’s most prolific composer, he has composed over 7000 songs, provided film scores for more than 1000 movies and performed in more than 20,000 concerts.

Earlier Govind Vasantha, the music director of “96” replied to the controversy of Ilayaraja calling his crew as impotent. He simply performed the violin version of Ilayaraja’s famous song “Sunthari” from the movie “Thalapathy” with the caption “Forever Ilayaraja” :

What do you think on this recent incident of Ilayaraja on his birthday ?? Comment your views below !!