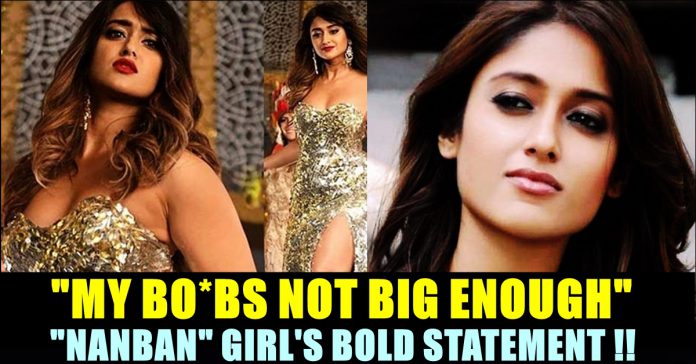 A day after Shah Rukh Khan’s daughter uploaded a post saying that she ot humiliated for her skin colour, actress Ileana who is known among Tamil audience for her appearance in Vijay-starrer “Nanban”, uploaded a post revealing the insecurities she had all these days. In the powerful post, the actress said how she overcame and stopped worrying about the ideals of the world.

Being an Indian film actress, Ileana D’cruz who predominantly appears in Telugu and Hindi films. She has also starred in two Tamil films and known among Tamil audience for pairing up with Vijay in Shankar’s Nanban, remake of 3 idiots. Ileana won the Filmfare Award for Best Female Debut- South for the 2006 for Telugu film Devadasu. She established herself in Telugu cinema with commercially successful films such as Pokkiri, Jalsa , Kick and Julayi . In Tamil cinema, D’Cruz has debuted in “Kedi”.

Amidst the lockdown, Ileana is keeping herself busy by updating her daily routines in the photo posting social media account. With 1 crore plus followers in the platform, Ileana has posted 1215 posts so far. In the most recent post, the actress came up with a revelation about her inferiorities.

“Not realizing I was never meant to be perfect. I was meant to be beautifully flawed. Different. Quirky. Unique. Every scar, every bump, every “flaw” just made me, me. My own kind of beautiful.” she wrote in her social media post to explain how she stopped worrying about herself.

The “Nanban” actress said that she stopped comforting the world in terms of their ideals of “being beautiful”. “Why should I try to fit in when I was born to stand out” the actress questioned and gave hope to the millions of her followers who are feeling bad about their outer appearance.

Adding the caption, Ileana attached a picture of herself wearing a bikini. “nophotoshop #nobs” her hashtags read. Check out her post and caption below :

I’ve always worried about how I looked. I’ve worried my hips are too wide, my thighs too wobbly, my waist not narrow enough, my tummy not flat enough, my boobs not big enough, my butt too big, my arms too jiggly, nose not straight enough, lips not full enough….. I’ve worried that I’m not tall enough, not pretty enough, not funny enough, not smart enough, not “perfect” enough. Not realising I was never meant to be perfect. I was meant to be beautifully flawed. Different. Quirky. Unique. Every scar, every bump, every “flaw” just made me, me. My own kind of beautiful. That’s why I’ve stopped. Stopped trying to conform to the world’s ideals of what’s meant to be beautiful. I’ve stopped trying so hard to fit in. Why should I?? When I was born to stand out. #nophotoshop #nobs 📸 @colstonjulian

This post from the actress garnered positive reception from her followers. Most of them lauded her by saying that she looks prettier than many other top heroines of Bollywood.