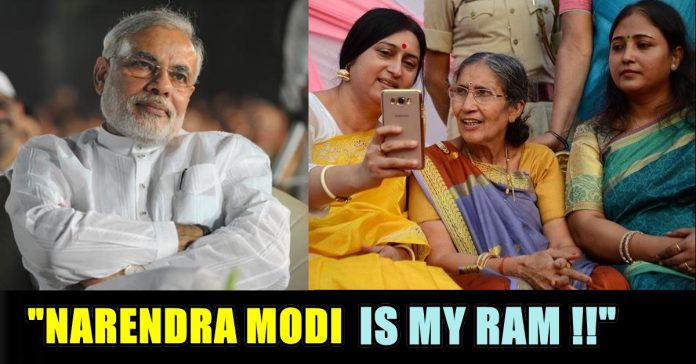 “I am surprised over Anandiben telling the press that Narendra bhai was not married (to Jashodaben). He has himself mentioned in his declaration while filing papers for Lok Sabha elections in 2004 that he is married and mentioned my name in it,” Jashodaben read out a statement in a video shot from her brother Ashok Modi’s mobile phone.

Jashodaben added: “It is very unbecoming of a well educated woman (Anandiben, former chief minister of Gujarat) to speak like this of a teacher (Jashodaben). Not only this, her conduct has tarnished the image of the prime minister of India. He is very respectable for me, he is Ram for me.” Speaking to IANS from their hometown Unjha in north Gujarat, her brother Ashok Modi confirmed that it was indeed Jashodaben talking in the video.
Jashodaben Narendrabhai Modi(born 1952) is the estranged wife of Indian Prime minister Narendera Modi. Their traditional marriage was arranged in Vadnagar by their families when they were children. The couple married in 1968 when Narendra Modi was 18 and Jashodaben was 16. He did not officially acknowledge this marriage until 2014 during his campaign. Jashodaben continues to identify as the wife of Narendra Modi. She completed her education and had a career as a teacher. Retired from teaching, Jashodaben lives a simple life of prayer.

What do you think on this statement ?