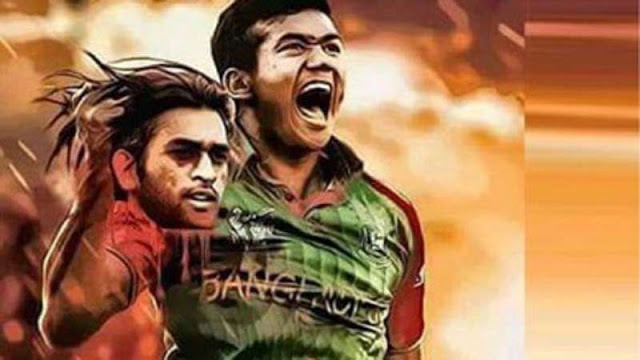 The real story behind the horrific Dhoni-Taskin photoshop and how an innocent Indian has become the target of venomous accusations.

One of the ugliest incidents around cricket in recent times has been a work of photo editing that has gone viral on the internet – a photoshopped image of Bangladesh’s Taskin Ahmed holding the severed head of MS Dhoni on the backdrop of the Hollywood film ‘300’. This controversial photo has left a trail of destruction in its wake, with the latest development being that an innocent Indian cricket fan is facing persecution in the Bangladeshi media because of it.

The barbaric image united cricket lovers from all around the world in condemnation of the excess of competitiveness that the image represented, as Bangladeshi fans in general earned a bad name in the international community.

However, latest developments put an entire new spin on the matter – a long-time fan of the Indian cricket team and MS Dhoni, Sumit Kumar, has been accused by Bangladeshi newspapers, TV channels and websites of having been the creator of the image. ‘India’s Sumit is original creator of Taskin-Dhoni image’, read Notun Shomoe’s headline on Monday.

Sumit Kumar, whose passion for cricket and the Indian cricket team motivated him to start a website, is flabbergasted at how the Bangladeshi media have targetted him without any rhyme or reason, or fact-checking.

Speaking exlusively to Sportskeeda, he said, “I’ve been having sleepless nights for the last 3-4 days because of these accusations. I’ve been in so much tension.
“I consider MS Dhoni to be my God. I can die but I will never insult my God.”
The real story behind the photoshopped image

The basis for the accusation is a very flimsy one. The photo that has become viral shows Taskin from his waist upwards, but the contention is that the original image (which shows Taskin’s left hand handling a sword and also includes his torso and legs) was created by Sumit. The reason for this assumption is that the original image is saved in Google Images under his name.

However, in making this inflammatory accusation, the media channels have failed to take two things into consideration – firstly, the image on Google Images which is ascribed to Sumit is from an article on his website from 5th March, two days after the photo became viral, and was reported on Sportskeeda as well.

Secondly, it can be easily found out that this picture, in fact, is an old picture which only resurfaced during this year’s Asia Cup. The original image can be sourced to a social media post from 2015, which has the watermark of a group called ‘Editing World’, a Bangladeshi image processing and graphic designing firm.

The image was created during the India-Bangladesh series right after the World Cup, but attained its virality status only this year.

Proof of the date when the image was originally shared, with a watermark of the makers – proof that it was not made by an Indian in 2016
‘EWZone’, the original makers of the picture in 2015, have now deactivated their account on Facebook, and are therefore out of reach. The deactivation was done within the last few days, but the administrators of that group are known. It is not yet known whether any action has been taken against them, or is even being initiated.

While the original miscreants are going scot free, the name of an ardent fan of Dhoni is being unfortunately dragged through the dirt.

Sumit says, “I was horrified when I first saw the image, but did not pay much attention to it because who cares for such people! Then I ran an article on my website when Ravi Shastri was asked a question about it, thinking that it had reached the players. It was then that I took the image from the internet. I had no idea Google would save my name alongside that image, and cause me such tension.”

Kumar is now approaching the cyber crime cell to initiate an investigation, but it is a big question to be asked how such a blatant accusation can be levelled against an ordinary individual without any verification.