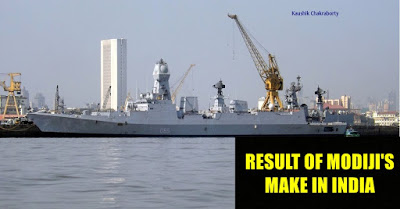 A Warship named after ‘Namma Chennai’ surely makes us all feel proud. The largest in class Made In India Warship was recently commissioned into the Indian Navy by the Defence Minister Manohar Parrikar. The best in class warship surely adds quite a punch to the Indian Defence. Here’s everything you need to know about the warship.

Built at Mazagon Dock Shipbuilders Ltd in Mumbai the ship is the largest ever warship to be made in India and marks the end of project 15A which involves three warship of the class.

The ship is designed to operate two multi role combat Helicopters- A HAL Dhruv and a Sea King.

It is armed with the BrahMos and Barak-8 missiles.

The ship`s crest depicts the outline of the iconic Fort Saint George at Chennai in the background, a part of the adjacent beach in front, and a sloop on blue and white waves in the background.The crew of the ship abides by the Sanskrit motto `Shatro Sanharaka` meaning `Vanquisher of Enemies`.